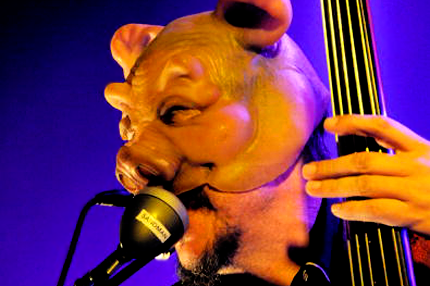 It’s been over a decade since Primus released a studio album, but the avant-garde funk rockers are set to release their first album since 1999’s Antipop. Frontman Les Claypool said the record is in its final stages of completion, and would feature material similar to the twisted prog-rock number “Last Salmon Man,” which they debuted at a New Year’s Eve show in Oakland, California. (Watch below.)

“For those of you that enjoyed the new song, ‘Last Salmon Man,’ that we played New Year’s, you’ll love the record because every song basically sounds exactly the same as that one,” Claypool joked in a post on the band’s website (via Spinner). “In fact, we just kept recording the same song over and over and I would just change a few of the lyrics around.”

Claypool also cracked that there’s a heavy Blue Oyster Cult running through the album: “Every song is pretty much a variation of ‘Don’t Fear the Reaper.’ Everyone should buy two copies.”

Since forming in the mid-’80s, Primus have released some of the goofiest and most challenging rock records, including 1995’s Tales From the Punchbowl, which featured their only huge commercial breakthrough, “Wynona’s Big Brown Beaver.” Primus have also famously contributed the theme song to South Park. While they haven’t released a full-length of material since ’99, Primus have consistently toured, including a 2010 trek with Gogol Bordello and Wolfmother.