The slimmed-down pop band's frontman responds to your Twitter queries, exclusively on SPIN.com. 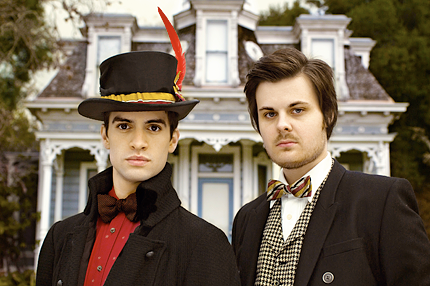 Panic! at the Disco will release their third album, Vices & Virtues, on March 29, and SPIN caught up with frontman Brandon Urie to chat about the LP — and ask him your questions, which we gathered via SPIN’s Twitter.

Here, Urie talks about the band’s creative process following the departure of founding members Ryan Ross and Jon Walker (who formed the Young Veins), Panic!’s upcoming tour, and the personal meaning of the LP’s title, Vices and Virtues.

What is your favorite song on Vices & Virtues?
Probably “Sarah Smiles,” which is about my girlfriend, actually, as sappy as that is. When I met her I wrote this song to try and impress her. I was infatuated with her. I played it for her and we’ve been dating ever since. That was a huge step for me, personally. I was able to build up my confidence to write a song and try to woo her. I’m a lucky guy.

What can fans expect from the new album?
There are definitely some new sounds. Though they’re familiar to our first and second records, these new songs couldn’t fit on those two records. We’ve always wanted to mess around with new ideas, arrangements, and instruments. There are synthesizers and keyboards, marimbas, and strings. We ended up buying some synths and messing around with them for months before working on the album. It was two kids in a candy store.

Are you still friends with Ryan Ross and Jon Walker?
I’m definitely glad to say that, yes, we are still friends. I talked to Ryan a couple days ago. We live close to each other and we’ve hung out a few times — gone to dinner, grabbed some drinks. We told each other we’d get together again soon. Friendship was really important to us when we split. It split was just about the music. It was mutual. We are super psyched for them and they’re stoked for us.

Will you work with Ryan and Jon again?
I don’t see why not. We haven’t talked about anything specifically, but if we take a break and meet up later that would be cool.

What do you do for fun when you’re not playing music?
When we first moved to California from Las Vegas we got into surfing. We figured we should do something to get in shape, but we hate working out. Surfing is definitely a work out. There were a couple close calls for us. It’s a really hard, really scary sport. We also recently got into Call of Duty: Black Ops. The zombie version is so fun.

What is your favorite album right now? Any recommendations?
We really love everything by Paul Simon. Arcade Fire’s The Suburbs is definitely one of our favorite new records. We listen to it non-stop.

Why did you name the new album Vices & Virtues?
I was looking at the lyrics, thinking, ‘What are the main themes here?’ They dealt with self-deprecation, pride, subversion, manipulation, but some good stuff too: self-expression, honesty. I was like, ‘Are these the seven deadly sins or something’? [laughs]. We did some research and ‘Vices and Virtues’ popped up. Aristotle has this Biblical list that’s tied in with themes of human behavior that we’ve been noticing in ourselves. This album is a study of our human behavior. It’s about our changes in self-esteem and the changes of growing up.

What was the hardest thing about writing the new album without two of Panic!’s members?
We had always written with the four of us, so it was a matter of coming out of that comfort zone. [Ryan and Jon] left and we were like, ‘What do we want to do?’ It was unfamiliar territory. I kept thinking, ‘What are people going to think about this song? Should I be worried about that?’ I didn’t think of myself as a lyricist and I was apprehensive about it. I sat down with Rob Mathes [who produced 2008’s Pretty. Odd and has worked with artists ranging from Jay-Z to Lou Reed to Carly Simon] and he said, ‘If you really want to write then it has to sound like you.’ I took his advice.

Did drummer Spencer Smith do more songwriting for this album?
Yeah. Between the two of us, it was about trying to figure out who was going to play which instruments. We usually write with one instrument and a melody. Then we throw what we call ‘ear candy’ all over the songs in the studio. We said, ‘We’re down to two people, so let’s push out as many ideas as we can.’ It was easy having an idea and explaining it to just one other person.

What was it like working with Rivers Cuomo?
Good! He was kind enough to invite us over to his house to write some songs for a day. None of them made the record, but we still had an awesome time. When we showed up he was incredibly nice, like, ‘Hey guys, come right in.’ He’s a really quiet talker; I’m very loud and expressive.

Will Panic! play theatrical live shows like those for A Fever You Can’t Sweat Out?
I really miss wearing costumes and makeup. I love throwing a big production. That’s really important for us. I’ve recently been reading about Tesla coils and I’m trying to figure out how I can get a Tesla coil that sits on the stage and shoots sparks without hurting anybody. We love to dress up for the special party.