Live at the Aragon captures an October 2009 gig from the band's Crack the Skye Tour. 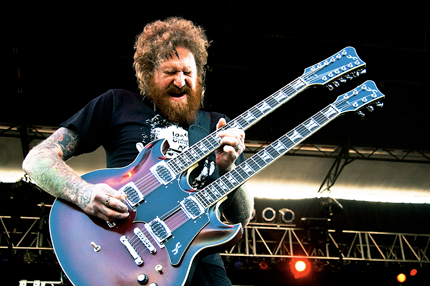 Mastodon are one metal’s most explosive live bands and they’ll finally cement their reputation with their first-ever concert album this Spring. On March 15, the Atlanta metal quartet will drop Live at the Aragon, a CD-DVD set that captures an October 19, 2009 gig at Chicago’s Aragon Ballroom, from their recent Crack the Skye tour. Check out the artwork and tracklist below.

Aragon features the band ripping through their 2009 epic Crack the Skye in its entirety, but will be bolstered with fan favorites from 2006’s Blood Mountain and 2004’s Leviathan. The set also includes a cover of the Melvins’ 1996 song “The Bit” and a 58-minute “tour film” capturing movies showing during the band’s live show.

For deep-pocketed fans, Mastodon are offering a limited-edition deluxe package of the album, which comes with ephemera like a “Mastodon guitar Pick Tin (with embossed picks)” and a reproduction of a tour laminate. Pre-order info is available here.

Live at the Aragon tracklist:
“Oblivion”
“Divinations”
“Quintessence”
“The Czar”
“Ghost of Karelia”
“Crack The Skye”
“The Last Baron”
“Circle of Cysquatch”
“Aqua Dementia”
“Where Strides The Behemoth”
“Mother Puncher”
“The Bit”