The guitarist reveals his post-White Stripes plans and says he's recorded a song with Jay-Z. 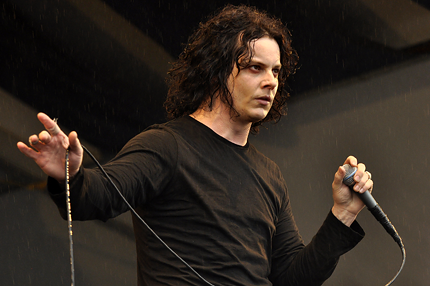 Three weeks since he announced the final break-up of the White Stripes, Jack White has opened up about his plans for the future — and the guitarist-singer says he has no intentions to form a new band. White says he will instead focus on his other acts (the Raconteurs and the Dead Weather), his record label (Third Man) — and perhaps work on solo material.

“I won’t join another band again,” White told British magazine Q (via DIY). “Three’s enough for one lifetime. If I can’t say it in any of these bands, then I’ll say it myself.” (The interview appeared in the latest print edition of Q, which isn’t available online.)

In addition to his two bands and his Third Man label, White has plenty of other side projects on tap, however. He’ll be included on Danger Mouse and Daniele Luppi’s spaghetti western-inspired Rome album; and he said in the Q interview that he cut a song with Jay-Z, although White is not sure if that song will ever be released.

As SPIN previously reported, the Stripes announced their break-up earlier this month, citing a “myriad of reasons [for the split], but mostly to preserve what is beautiful and special about the band and have it stay that way.” The duo had been on indefinite hiatus since 2007, when they abruptly canceled a U.S. tour due to Meg White’s “acute anxiety” issues.