Watch the clip for "Daphne," a metaphorical interpretation of a Greek myth about a woman transforming into a tree. 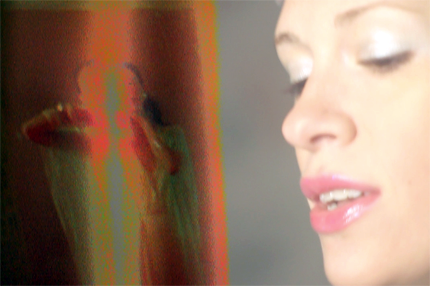 The clip — directed by Aaron Brown (Girls, Smith Westerns, Los Campesinos!) — is a metaphorical interpretation of the song, which recounts the ancient Greek myth of Daphne, a woman who transforms into a tree. “It is a story that challenges our concepts of flight and attachment, transformation and rootedness, desire and captivity,” Ices tells SPIN. “It was important to Aaron and I that these images and themes be revealed symbolically, without the need to adhere to formal narrative.”

The clip begins with a young boy wandering through a forest, collecting branches while Ices observes from afar. Soon images of erupting fire, roaming animals, and people frolicking around in white clothing are added. ‘[It] goes from a supernatural world and spirals into a Fellini-esque nighttime revelry,” Ice says.

As the clip concludes, Ices emerges in the storyline: “I reveal myself as the empowered and expressive storyteller, until I, like Daphne, make my final transformation,” she says.

What does she transform into? Watch the video to find out, then sound off in the comment section.