The Los Angeles crew live up to the hype on Late Night. 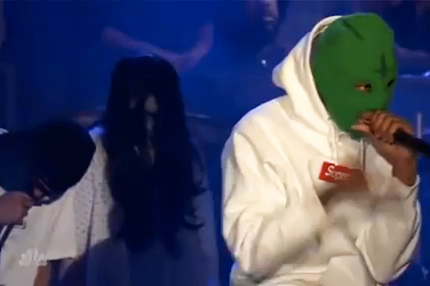 Los Angeles’ Odd Future, rap’s most outrageously subversive newcomers and one of SPIN’s Next Big Things for 2011, lived up to the hype Wednesday night on Late Night with Jimmy Fallon with a completely wild TV debut. Watch the performance below.

With a little help from house band the Roots, leaders Tyler, the Creator and Hodgy Beats delivered a total spectacle while playing their song “Sandwiches”: They rushed the stage — decorated with lawn gnomes — in bank-robber masks, spat rhymes about Ellen DeGeneres and schoolyard violence. Then Tyler ran amok in the studio, jumped on Fallon’s back, and rode him like a pony. Then Mos Def appeared out of nowhere. It’s crazy.

For more on Odd Future, check out their feature in SPIN’s March issue.

What do you think about Odd Future? Worth the hype? Tell us in the comment section.WATCH: Odd Future, “Sandwiches”