The actress will reportedly cover His Purpleness' smash hit "Kiss" on show, set to air March 8. 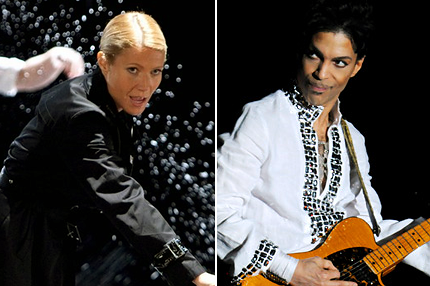 After delivering a crazily popular performance of Cee Lo’s “Forget You” on Glee, Gwyneth Paltrow is set to make a second appearance on the hit FOX show. And she’s got some ace material to perform this time around: The actress will reportedly cover Prince’s 1986 “Kiss,” according to TVLine. The show will air on March 8.

Paltrow will team up with actor Matthew Morrison for the Prince cover, which TVLine says will be a “sexed up,” “too hot for TV” version of the song. (Is it even possible to make a sexier version than Prince’s original?) Plotwise, Paltrow’s character (substitute teacher Holly Holiday) returns to McKinley High and becomes romantically entagled with Morrison’s Mr. Schuester.

In case you missed it, Prince closed out his Welcome 2 America Tour on Monday at Madison Square Garden, where the funk legend kicked Kim Kardashian off the stage. You owe it to yourself to watch video of the show.