Get It Now: Strokes First Single!

They're back with "Under Cover of Darkness," from March's Angles, and they sound Strokesier than ever! Download it now. 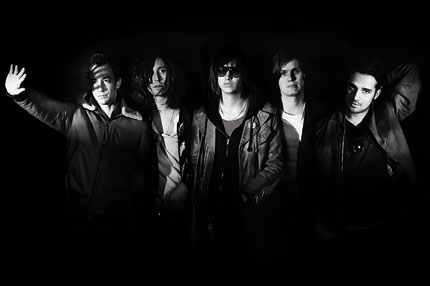 It’s here. Finally. The first taste of the Strokes’ long-awaited (and, at times, in doubt) fourth album, Angles, out March 22. The song is called “Under Cover of Darkness” and it’s available as a free download for the next 48 hours via the band’s official website.

Sure, Julian Casablancas recorded his vocals separately from the rest of the band. And maybe New York City’s modelizingest aren’t besties anymore now that they’ve matured. But none of that really matters as long as the feverishly anticipated Strokes comeback actually sounds like the Strokes we all know and love and tried, unsuccessfully, to dress like.

And, judging from “Under Cover of Darkness” — it does! From the opening guitar squeals, shuffling backbeat, and familiarly muffled vocals to the sing-along chorus, the song is unmistakably from the gents who gave us Is This It? a decade ago. Not much in the way of frills or experimentation a la 2006’s First Impressions of Earth or last year’s Julian Casablancas solo album, but that’s clearly not the single’s intention. All it’s meant to do is say, “We’re back, and we’re just fine,” and that it does.