James Moll's portrait of the band will be unveiled at this year's South by Southwest festival. 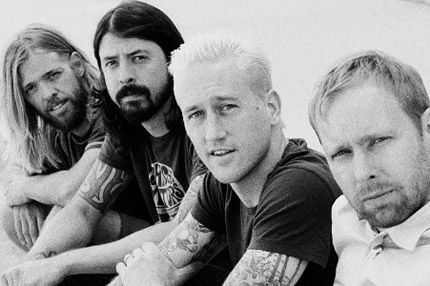 As they lead up to the release of their seventh studio album on April 12, Foo Fighters will also be coming to the big screen. Director James Moll (who helmed the Oscar-winning 1998 documentary The Last Days) is working on a career-spanning documentary of Dave Grohl’s band, which will premiere at this year’s South By Southwest Festival in March. A theatrical release will follow shortly thereafter, according to Spinner.

Moll’s visual portrait will chronicle the Foos’ 16-year-history, from its start as a one-man project started by Grohl up through the sessions of their latest album. The doc promises to be a no-holds-barred look of the band.

“In October of 1994, I walked into Robert Lang’s Seattle studio with a guitar, a drum set, a bass and 14 songs I thought nobody would ever hear,” Grohl said in a statement. “Five days later, I walked out with the first Foo Fighters record. Sixteen years and seven studio albums later, with the help of Academy Award winning director James Moll, we’re finally able to tell the story of how that one demo cassette turned into the band that we are today. This is our side of the story. From the first rehearsal, to the completion of our new album, it’s all there.”