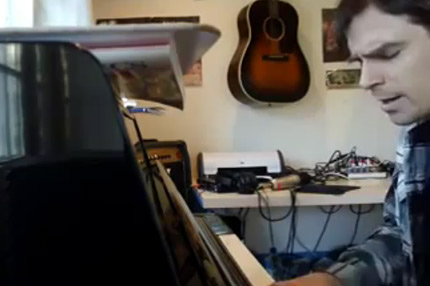 The Beach Boys’ “God Only Knows,” from their groundbreaking 1966 album Pet Sounds, is one of the most timeless songs in popular music. Recently, Weezer singer-guitarist Rivers Cuomo recorded a solo cover of the ballad. Watch his performance below.

Accompanying himself on piano in his home studio in Los Angeles, Cuomo offers a spare and emotional take on the tune, which, on Pet Sounds, swells with a wall of instrumentation, including horns, strings, and more.

Cuomo’s love of the his fellow Los Angelenos the Beach Boys is nothing new. He also covered their classic “Don’t Worry Baby” on his 2008 compilation album Alone II: The Home Recordings of Rivers Cuomo. And in SPIN’s Best of 2010, he name-dropped the band: “I know it didn’t come out in 2010, but I didn’t listen to anything this year except Beach Boys’ Pet Sounds. It’s perfect.”

Elsewhere in Weezer-land, the band recently wrapped their Memories Tour, one of SPIN’s best concerts of 2010, which saw the power-pop vets play their first two releases — 1994’s The Blue Album and 1996’s Pinkerton — in their entirety. Read our concert review here.

And there’s more! Cuomo is prepping four more volumes of his Alone demo series; a collaboration with indie-pop band Best Coast; and a book collecting his diaries from the Pinkerton era. For more, read our recent interview with Cuomo here.