Fall Out Boy guitarist posts a capella versions of "Empire State of Mind," "Love the Way You Lie," and more. 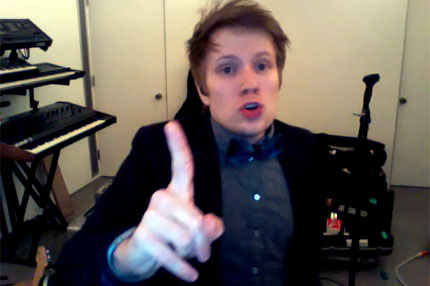 Patrick Stump has been intensely focused on his solo debut Soul Punk, which is due out later this year. But the Fall Out Boy has found a way to blow off steam during recording sessions: recording a capella versions of some of his favorite pop jams. In a video uploaded to his YouTube channel, Stump filmed himself doing inventive versions of Eminem, Cee Lo, Lady Antebellum, and more. Watch below.

In the clip, Stump plays backup vocal tracks of himself singing and beat-boxing as he flows fairly effortlessly between Jay-Z’s “Empire State of Mind,” Eminem and Rihanna’s “Love the Way You Lie,” Lady Antebellum’s “Need You Now,” B.o.B’s “Nothin’ on You,” and Cee Lo’s “Fuck You.” But the best part is watching Stump in such a vulnerable mode, throwing diva-like hand gestures, rocking an intense furrowed brow, and unleashing pyrotechnic melismatics (just scan forward to the 2:20 mark).