Will Sheff & Co. are joined by New Pornographer A.C. Newman on "Wake and Be Fine." 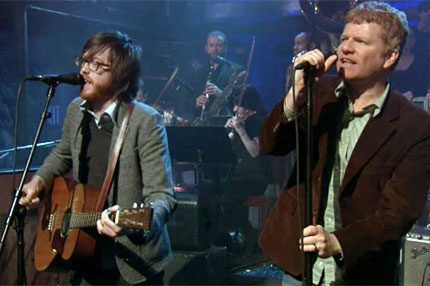 Hyper-literate Austin, Texas, folk rockers Okkervil River won’t release their next album, I Am Very Far, until May 10, but they debuted a first taste of the new material last night on Late Night with Jimmy Fallon — watch them perform “Wake and Be Fine” below!

Sporting a shaggy beard and maintaining his trademark disheveled professor look, frontman Will Sheff led his band through the mid-tempo number with a ferocious urgency more akin to the band’s 2005 breakthrough album Black Sheep Boy than more recent efforts (although their last one, 2008’s The Stand Ins, was masterful in its woozy haziness).

Watch “Wake and Be Fine” below and tell us what you think in the comments.