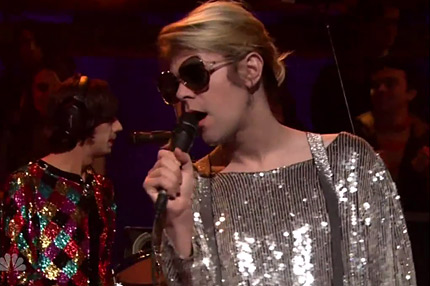 For more than a decade, Ariel Pink has been making awesome, lo-fi outsider music, including deranged pop with his band Haunted Graffiti on albums like last year’s breakthrough Before Today and 2006’s overlooked House Arrest. Wednesday night, Pink and his band made their national television debut on Late Night with Jimmy Fallon, performing their breakout single “Round and Round.” Watch it below.

Pink’s performance may be one of the weirdest ever to air on late night TV. “Round and Round” isn’t exactly mainstream fare – the tune is a five-minute, drugged-out take on Seventies AM gold pop, as if Daniel Johnston was covering Steely Dan. And the guys only add to the tripped-out vibe by dressing head-to-toe in drag, with kitschy sequin tops straight outta your grandmother’s closet.

What do you think of Ariel Pink’s late-night debut? Hit us in the comments.

WATCH: Ariel Pink’s Haunted Graffiti, “Round and Round” (fast forward to 36:50 to watch!)