The Strokes’ Fourth Album Due in March 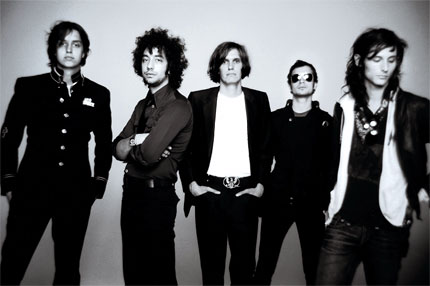 It’s been five years since the Strokes released their last album First Impressions of Earth, but the New York quintet have confirmed that they’ll drop their fourth record in March. The still-untitled release is in the mixing stage.

Bassist Nikolai Fraiture revealed in an interview with the BBC that the new LP will have a “classic sound” similar to the group’s second and third releases. “Sonically, I feel it’s the album which should have been made between Room on Fire and First Impressions of Earth,” he said.

The record may recall their past work, but Fraiture said the creative process was different this time around, with singer Julian Casablancas recording his vocals separately from the band. “Usually, we’re always in a room and changing stuff and doing it all together,” he said. “It’s all a learning experience.”

They’ll hit the road for a massive tour in support of the album. Fraiture said the group is currently plotting dates “around the world.” So far they’ve announced headlining slots at festivals like Spain’s Benicàssim in July and Japan’s Summer Sonic 2011 in August.