A young boy and a girl bond on a snowy night in the clip for "In the Dirt," directed by two Swedish brothers. 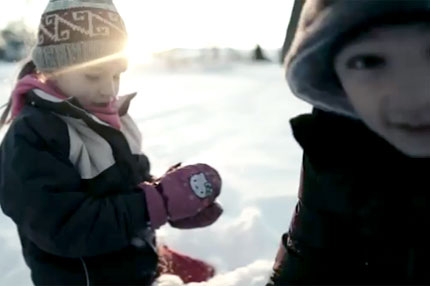 Sean Carey, who sings and plays multiple instruments in Bon Iver, released his debut solo album as S. Carey this past fall, and nabbed a spot on our CMJ 2010 Artists to Watch list. But while his music is relatively new, it’s already earned him superfans abroad: Two brothers from Sweden crafted a beautiful video to Carey’s “In the Dirt,” then sent it to his manager — and now it’s the song’s official video! Watch below.

The clip depicts two children, a boy and a girl, bonding in friendship on a snowy night. For Carey, it struck a chord the first time he saw it.

“The song is an anthem about staying together with a person for your whole life,” the Wisconsin-based Carey tells SPIN. “Me and my wife want to have kids at some point. And to see these kids interacting the way they were, and just to see how beautiful children can be, combined with my desire to have kids — I just loved it.”

Carey, a lover of photography who posts loads of pics on his blog, also admired the way the video was filmed. “The mood of the images made it feel like all of the scenes could be photographs,” he says. “The kind of photos I’m a sucker for, with the use of weird lights, different angles of buildings and trees.”

The video was a labor of love — and bonding — for the two Swedish filmmakers who made the video, Nils and Axel Byrfors. “[We’re] both in the film and editing business. But Axel lives in Buenos Aires and this Christmas was the first time meeting up in two years,” Nils tells SPIN. “We had long talked of taking the opportunity to do something together. We heard ‘In the Dirt,’ loved it instantly, and came up with the idea to create a story around a young girl leaving home at night.”

“The children showed enormous patience as they had to stay up at nighttime and work with us until daybreak in the freezing cold,” Nils continues. “Their natural feeling of despair while shooting the film actually made the directing easier and somewhat more interesting. But we can assure you that they were warmed up in a car and bribed with hot chocolate and sandwiches every now and then!”

Watch the video below for “In the Dirt,” then scroll down for S. Carey’s upcoming tour dates and news about Bon Iver’s next album.

Carey has been chuffed about the response his solo debut has received, and has a good attitude about sometimes being known as “that guy from Bon Iver”: “I’m pretty honored to hold that title. Without that experience and without that connection with the fans, I don’t think my album would be reaching as many people.”

While he keeps busy on tour as S. Carey (see tour dates below), the next Bon Iver record looms in the future. Carey’s not sure yet whether he’ll participate in the album’s recording (Bon Iver’s debut, For Emma, Forever Ago, was essentially a solo work by frontman Justin Vernon), and he says there’s not yet a timetable for its production or release.

And even though Vernon’s been hanging out and recording with Kanye West, Carey assures us all is well. “He hasn’t changed,” he says of Vernon. “Not a bit. And I really liked the Kanye stuff way more than I thought I would.”