The female MC has Weezy replace Eminem on reworked version of her standout track "Roman's Revenge." 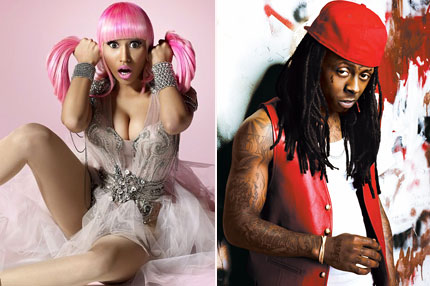 For her debut album Pink Friday, Nicki Minaj teamed up with Eminem on the standout track “Roman’s Revenge.” But now the rising star has leaked a new version of the track (available on iTunes next week) that features a guest spot from her Young Money mentor Lil Wayne. Head over here to hear it.

“Roman’s Revenge 2.0″ is a replica of the original, with the exception of Wayne substituting Em for his guest verse. But it works: Weezy manages to match Em’s hot-headed energy and literally runs out of breath as he rhymes, “I’m just pluckin’ my ashes / I’m a-puffin’ and passin’/ I’m a-fuckin’ that ass!”

Wayne has wasting no time working on new projects since getting out of Rikers Island in November. The rapper most recently filmed a video for his first post-prison track “6 Foot 7 Foot” and he’ll release his highly anticipated Tha Carter IV later this year.

Which version of “Roman’s Revenge” do you prefer? Sound off in the comments.