The rap titans release wild, orchestral anthem "H.A.M," the first single from their album, due in March. 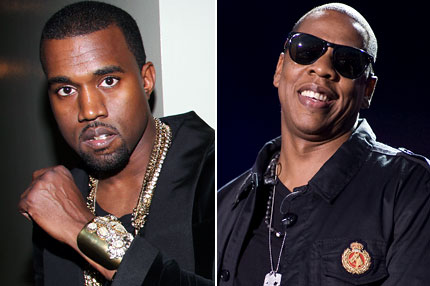 Kanye West and Jay-Z have teamed up for their collaborative album Watch the Throne, which is reportedly due out March 1. But the first single “H.A.M” has leaked online. Head over to the Watch the Throne Facebook page to hear it.

The track, produced by Lex Luger, is a wildly produced, orchestral anthem that matches the pair’s outsized baller status. Over staccato synth stabs and a brash, electronic beat, West and Jay trade verses boasting about their sexual conquests, among other things. “I’m about to go H.A.M,” West raps. “Hard as a motherfucker, let these niggas know who I am!” (Evidently, the title “H.A.M” has nothing to do with pork product.)

Kanye’s latest My Beautiful Dark Twisted Fantasy was the most epic album of 2010 – and the rapper’s ambitions haven’t eased up one bit here. The track morphs into the weirdest sounding opera ever, with a female singing window-shattering trills over a gospel piano progression and the song’s hard-hitting beat.