A big screen adaptation of band's smash musical — is being discussed - plus other Broadway projects. 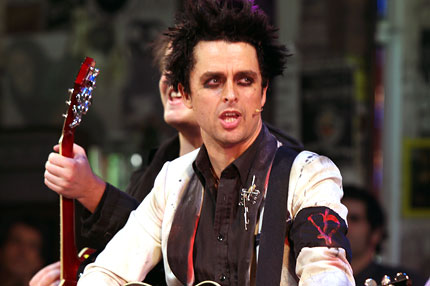 After bringing their 2004 album American Idiot to Broadway, Green Day may be turning their smash musical into a movie, with frontman Billie Joe Armstrong likely to star in the lead role of St. Jimmy.

In an interview with The New York Times, playwright Michael Mayer, who directed the stage version of Idiot, said they’re in discussions with producers to develop it for the big screen.

“We’re definitely in talks,” he said. “There are people who have the ability to make it happen, who have expressed genuine interest in it, and we want to do it, so I think it could happen.” (According to the Times, Tom Hanks’ Playtone production company is among the parties who are interested.) As for whether Armstrong would play the role of St. Jimmy, which he’s reprised this month for a string of shows, Mayer said, “I think that’s a no-brainer.”

Green Day have more on their plate than just a movie-version of Idiot. Armstrong says he and Mayer are also collaborating on another musical — only this time it will be written specifically for the stage instead of being based on a Green Day album.

“I think I’d be interested in the future of really getting into writing specifically for a show, that’s something I’d really love to do,” Armstrong said. The singer believes his work writing punk music will make him suited for creating an original musical: “The kind of music that I like is very immediate and very catchy, and you identify with it quickly, and I try to write like that. And in musical theater it’s the same thing: you identify with the songs immediately, the good ones anyway.”