Get Up Kids Unveil Hot New Tunes at Tour Opener 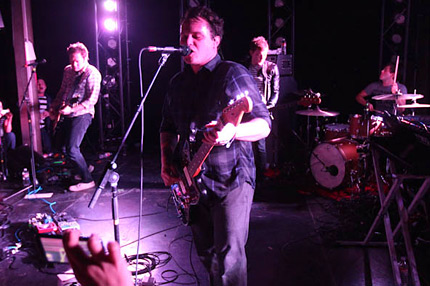 The Get Up Kids opened their tour behind the brand-new LP, There Are Rules, improbably in Houston, Texas of all cities, just days before the record hit the streets. The influential and massively-adored ’90s emo group is continuing a comeback that began in 2009 with a reunion tour that celebrated the tenth anniversary of their watershed breakthrough, Something to Write Home About.

That tour two years ago brought out all the diehard emo kids who had latched onto the band in the mid-to-late ’90s to relive the pop-punk bliss and romantic trauma that came with the band’s most revered album. But this weekend’s show wasn’t a nostalgia trip, as the group delivered an energetic set that showcased their new, more electro-heavy sound.

After ripping into lead-off track “Tithe,” a three-minute blast of crunchy guitars and clattering drums, they immediately followed with “Action & Action,” from Something to Write Home About, which sounded pithier in comparison to the band’s new songs.

Accordingly, it was the band’s classic cuts that drew the biggest response from the crowd. “Shorty,” from their 1997 debut Four Minute Mile, still sounded awesomely scrappy and anthemic, even if the Kids were cast in a dazzling, modernized light show that had the air of U2-lite.

In stark contrast to that song, the group quickly veered into more modern territory with “Shatter Your Lungs,” which featured hot electro blips and bleeps and vaguely turned the room into a sweaty disco, and proved that these ’90s icons still have present day relevance.

Craig Hlavaty
Tags: The Get Up Kids, We Were There

The Get Up Kids Announce Fall Tour

Stream The Get Up Kids New Album Problems