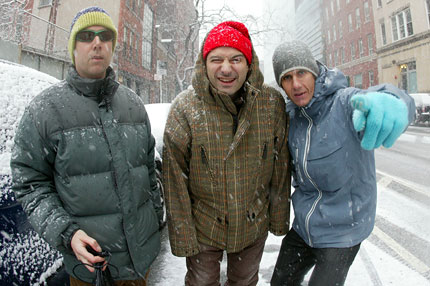 Eighteen months after being diagnosed with cancer, Beastie Boys’ Adam Yauch is on the mend – and the hip-hop icons are forging ahead with their comeback album Hot Sauce Committee, Part 2, due out this Spring.

“[It’s] a good thing,” the Beasties’ Mike D told the BBC of Yauch winning his health battle. “We’re really happy about it.”

Before the group drops their new album, they will finish making a music video – which D says will be more of mini-movie. “It’s not even a video, it’s a film-eo,” he said. “A cinematic, short film.”

Expect the “film-eo” to be a remake of the group’s 1986 classic “(You Gotta) Fight for Your Right (to Party),” which Yauch is slated to premiere at Sundance this month. The short film – titled Fight For Your Right Revisited – features an all-star cast of actors, including Elijah Wood, Danny McBride, Seth Rogen, Will Ferrell, John C. Reilly, and Jack Black. According to the Sundance website, the movie is subtitled: “After the boys leave the party…”