Why They’re Called… The Dismemberment Plan

Travis Morrison shares the story behind the reunited post-punkers' name 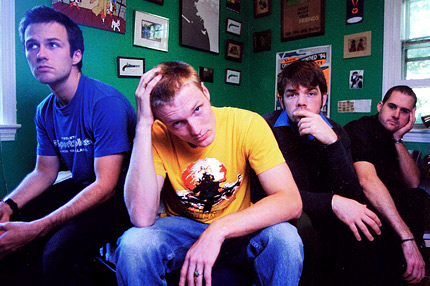 This week: Beloved Washington, D.C., quartet the Dismemberment Plan, who in January will reunite for their first tour in seven years to support the vinyl reissue of their indie 1999 classic Emergency & I.

Why Dismemberment Plan: “The [1993] movie Groundhog Day was out when we were just starting to play together,” recalls singer-guitarist Travis Morrison. “Like most young bands we had about 75,000 possible names written on a piece of paper, but I remember going to see that movie in Williamsburg, Virginia, and there’s a part where an insurance salesman is talking to Bill Murray’s character and mentions the death and dismemberment plan. I walked out of the theater after the movie was over and asked the friends I was with if they thought the Dismemberment Plan was a good name for a band. They were like, ‘No!’ Then later I asked the other guys in the band and they were like, ‘No!’ But I ended up making an executive decision — I just liked the name so much. A funny addition to that is after we recorded our first record, [Fugazi’s] Ian MacKaye said we should change our name. He was a Negative Nelly. I want the world to know that.”

Previously Rejected Names: “We had a bunch of names that were pejorative terms for white people. There was Cracker, which we couldn’t use because David Lowery from Camper Van Beethoven named his band that first. We also had Whitey. I guess I have a lot of racial anger! But I also remember that we were thinking of calling the band Number One Cool Guy.”