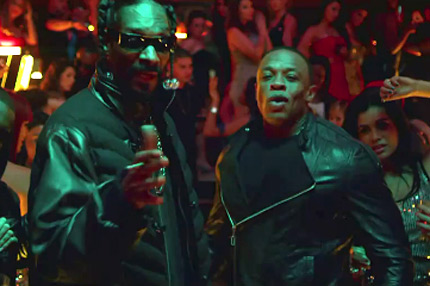 Dr. Dre and Snoop Dogg are together again, and in the just-released video for the first single off the Doc’s decade-in-the-making album Detox, the boys have upgraded their smoke from The Chronic to “Kush.” Watch below!

It must be some seriously good weed: Everything is moving in slow motion in this appealing, futuristic-looking video. It’s a glamorous night out in Los Angeles for Snoop and Dre, and their homey Akon: They hit a drag race party, sip bubbly in the club, throw $100 bills on their private jet. Meanwhile, the rest of the world is frozen in time, including a gaggle of beauties puffing a joint or dancing in the club, in only their bras, naturally.

No word yet on a release date for Detox, but could all the delays be the end result of “Kush” and its side-effects?