The Fugees performs for Prince and others at an intimate Brooklyn gig. 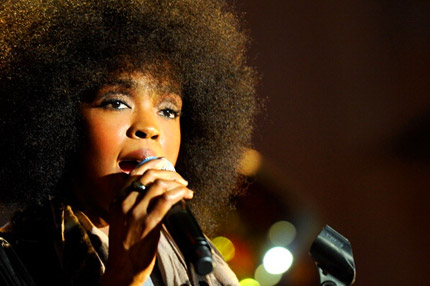 Lauryn Hill has slowly been returning to the stage this year, performing summer gigs at the Rock the Bells Festival and, recently, a string of East Coast shows. On Tuesday night, the Fugees singer hit New York City, where she played an intimate set at Brooklyn’s Music Hall of Williamsburg. Check out clips below.

Hill didn’t hit the stage until three hours after her 9 P.M. curtain call, according to Brooklyn Vegan, but fans who patiently waited (including Prince and Janelle Monae) were treated to a set that was heavy on Fugees tracks and cuts from Hill’s groundbreaking R&B album The Miseducation of Lauryn Hill, No. 78 on SPIN’s list for the 125 Best Albums of the Past 25 Years. She also delivered some choice covers, including a soulful, note-perfect version of The Flamingos’ doo-wop classic “I Only Have Eyes For You.”

If you missed the gig, no worries: Hill has 18 dates scheduled for 2011, including six New York City shows and two featured spots at Miami’s Jazz in the Gardens Festival. Dates below.

WATCH: Lauryn Hill, “I Only Have Eyes for You”