Tom Gabel Talks Future of Against Me!

The Florida punks, newly released from their Sire Records contract, hope to put out an album a year for the next decade. 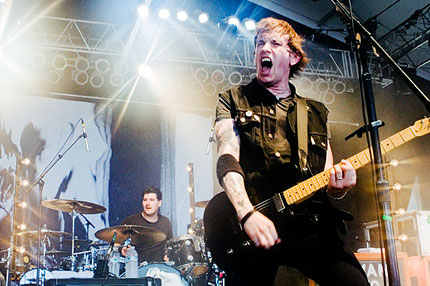 Tom Gabel, frontman for Florida punks Against Me!, once wrote a song about navigating the music industry called “Unprotected Sex with Multiple Partners.” As in, you can try to be a rock star, but you’re probably going to contract a disease in an uncomfortable place. Despite his reservations, Gabel and Co. crafted two seminal albums — New Wave, SPIN’s 2007 Album of the Year, and 2010’s White Crosses, one of the year’s 40 Best — while recording for major label Sire, but now that relationship has ended, leaving the band’s future wide open.

“It definitely feels like a cliché to call it a clean slate, but it’s true,” Gabel tells SPIN from his home in Florida. “We worked with Sire/Warner for five years, and in some ways it doesn’t seem like it was that long. But when you think about it, five years is a long time. So it’s nice to try something different. That’s really always been our approach, too, to try a bunch of different things — you want to be having as many different experiences as you can, if possible.”

Maybe we’ll call the next era of Against Me! “Safe Sex with Carefully-Chosen Partners.”

Here, Gabel reflects on his major label experience, talks about his band’s next steps, including a super-ambitious plan for releasing new music, their new drummer, and much more. The band is also announcing a slate of new tour dates for 2011 — check them out below.

SPIN: You had written lyrics that were critical of major labels before you were on one. Looking back on the experience now, how does it all seem in retrospect?
Tom Gabel: I feel fortunate to have had the experience in a lot of ways, and that was the point of it. We originally had gone through a big process of being courted by a bunch of labels and decided not to do it. We ended up going through the process again and decided to do it the second time around. A lot of the thinking back then was like, “Okay, here’s this opportunity, why not go ahead and take it and see what happens and what comes from it?” I definitely was paying attention the whole time and, hopefully, I’m walking away from it with an education, really, and kind of a clearer idea of the direction I’d like to take things long-term. When we originally signed, I never wanted to be like, “Okay, that’s it. The next 25 years I want to work with this label.”

Obviously getting to work with Butch Vig — that was one of the big benefits of being on a major.
The most positive thing to come out of our decision to work with Sire/Warner was the relationship we formed with Butch. For me, that’s the closest I’ll ever get to going to college. I got such an education from working with him and felt so fortunate because it’s fucking knowledge I can use for the rest of my life. It was such an overwhelmingly positive experience and fun making the records. I feel that that outweighs any minor bad thing that happened along the way.

While you guys were having your first major label experience, things really changed with the way that people were distributing music thanks to developments in technology. Are there things that have happened in the last couple of years that are giving you some inspiration as you embark on this next chapter?
For sure. Obviously, seeing the way that a lot of more independent bands are using the internet, and with the ways that you can make a record or promote a record without relying on other people, in a more DIY fashion, is obviously very inspiring and I think there’ve been great advancements made towards that in the last couple years.

To what are you looking forward the most?
Really, I’m looking forward to being able to move quicker and feeling unburdened in that way. Right now, with everything being wide open, it feels like we can do whatever we want. We can put out a record as quickly as we can write the songs. So we’ll just see what happens.

What’s the story with the transition behind Against Me!’s drum kit?
George is in Australia right now with Hot Water Music. I don’t know what their plans exactly are but I know Chuck [Ragan] has been talking about them making a new record this year. So, I’m pretty sure that’s what George is going to be doing. This past weekend we played our first few shows with Jay [Weinberg, son of Springsteen drummer Max], although technically Jay’s been coming out to our shows for years. In the past he would jump up and play drums for the last song of the set. I’m looking forward to that being more of a long-term thing and hopefully that’ll be what happens.

Is he permanently in the band at the moment?
I’ve just learned over the past couple years to not sign anything or to not make anything 100% concrete and having a more laidback “we’ll see what happens” type of attitude about things. [laughs].

Are there are new songs that have been germinating over the last year or so? How close are you to putting out new music?
I’ve been kicking around a couple songs. We’ve had a little bit of time off and have made some progress with putting some stuff together. I don’t imagine we’ll be recording in the next month or anything… For the past decade, we’ve put out a new record every two years. In entering this new decade – and because I just turned 30, I’m thinking about the next 10 years of my life – I want to put out a record every year for the next ten years, at least. That’s my long-term goal. Who knows if that’ll happen, but that’s kind of what I’ve been thinking.

Does that include some solo stuff? Will we see some more solo music from you outside of Against Me!?
I’d like to, yeah. For sure. The goal for me is to have the setup to be able to be that prolific. If I can do an album a year for the next ten years, then hopefully I can do more than that.

Against Me! Winter Tour Dates