"It's impossible for us to get in a room and not come up with ideas," says the band's guitarist. 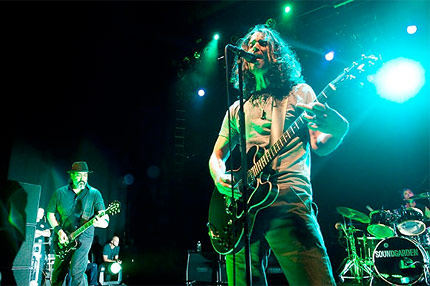 After a triumphant reunion that included a headlining slot at Lollapalooza, Soundgarden are focusing on their future — and a new album might be in the cards.

In an interview with a Canadian radio station (via Blabbermouth), Kim Thayil revealed the band has been kicking around ideas for a new record in the studio.

“When we get together to rehearse, it’s natural for us, being guys who have a rapport, to start jamming and inventing,” the guitarist said. “We’ve come up with instrumental, and certainly on occasion, lyrical ideas. I’m not confirming anything, but it’s impossible for us to get in a room and not come up with ideas. It’s very likely in the future, perhaps sooner than later, we’ll get together and de-emphasize the rehearsing part and emphasize the jamming part.”

Before the band gets to work on new material, Thayil says Soundgarden will put out archival releases, including live records and collections of B-sides. “We had a live album in the can just waiting for someone to mix it,” he said. “We wanted to do a B-side album and that might be two or three albums. We’ll be doing other shows and working on releasing some albums from deeper in our catalog.”

Don’t expect any releases right away, however. Thayil says the band members have other side projects to take care of first, but once those are wrapped, they’ll return to Soundgarden full-force. “The guys have other commitments,” he said, “but this is the thing we’re most excited about.”