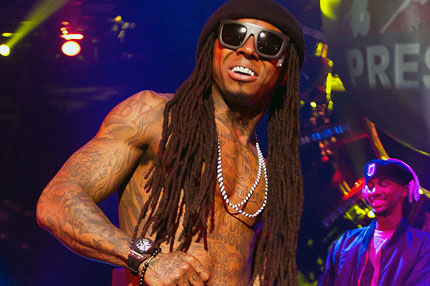 You’d think the prolific Lil Wayne would’ve released a dozen mixtapes and two official albums in the six weeks he’s been out of prison. Turns out he was making sure his first post-pokey track was just perfect: the heavy hip-hop banger “6’7,'” which leaked on the web this afternoon. Hear it here (via NahRight).

“6’7′” was produced by Bangladesh, who helmed Wayne’s 2008 smash “A Milli,” and revolves around a crazily tweaked sample of the calypso classic “Day-O (The Banana Boat Song),” made famous by Harry Belafonte in 1956.

But it’s Wayne (devoid of any auto-tune effects!) that steals the show: The rapper goes on about his charisma (he rhymes with “vodka with a spritzer”), his Young Money posse, and his sexual conquests (it sounds like he’s got a thing for “synchronized swimmers”). The funniest moments come when Wayne boasts about his newfound freedom and his status as one of the best in the game: “You niggas are gelatin, peanuts to an elephant?/ I got through that sentence like a subject and a predicate.”

The track also includes a cameo from Bronx-based rapper Cory Gunz, and if his guest verse at the track’s end is any indication, Wayne’s newest protégé is going to blow up big time: Gunz has a dizzying, rapid-fire flow that’s faster than Speed Racer.

What do you think of Wayne’s first post-prison track? Sound off in the comments.