The hip-hop all-stars team up for hot new track "Syllables." 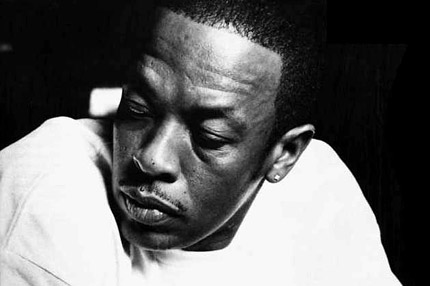 As Dr. Dre gears up for the release of Detox early next year, more tracks have leaked online. The latest: Dre’s collaborations with Jay-Z, 50 Cent, and Eminem on “Syllables” – and his pairing with Em and Nas on “Topless.” Hear both tracks here.

“Syllables” is the hottest of the two tracks – a scathing critique of hip-hop culture from four of the biggest names in the game. “The DJ’s playing them hits,” Em raps over a minimal beat and a dulcet harp melody. “Aw, this my jam, this my shit / We don’t know a word to the verse / All we know is the chorus because the chorus repeats the four same words for us.” And while Jay and Dre spit equally hilarious lines – listen for Jay’s goofy pronunciation of the word “syllable” – 50 brings the biggest laughs: Sounding asleep behind the mic he raps, “Fe fa dee da day / Just give my check…You ain’t even listening and I just took your money.”

Dre’s collabo with Em and Nas on “Topless” is a bit more conventional: a three-minute, mid-tempo jam anchored by a heavy boom-bap and brooding piano melody. In fact, the song seems to contradict the message of “Syllables” at points, particularly in the chorus when the trio sing about topless girls and rolling around in cars with guns.

It’s not clear if these two tracks will end up on Detox, but Dre has officially teased the new record with his recent, futuristic video with Snoop Dogg for “Kush,” which you can check out here.