Indie vets return with "Discoverer," the anthemic opening track from their March release Collapse Into Now. 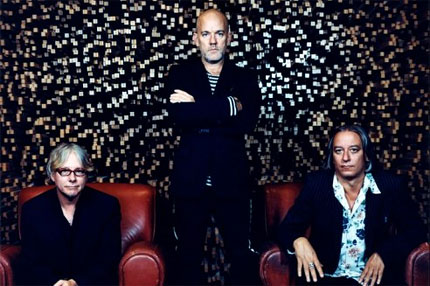 Imagine Michael Stipe in a Santa suit — because Christmas has come early for R.E.M. fans!

On Wednesday, the Athens, GA, indie forefathers offered a present: “Discoverer,” the opening track off their fifteenth studio album, Collapse Into Now (out March 8). Download the track for free — well, in exchange for your email address — at the band’s website.

So, is it keeper… or a holiday sweater from grandma?

Definitely the former. Multi-instrumentalist Mike Mills wasn’t joking when he told SPIN that Collapse Into Now was more “expansive” than their snappy 2008 release Accelerate. “Discoverer” features a wall of chiming piano, and guitar riffs that build to a triumphant chorus.

As previously reported, the 12-track Collapse Into Now was produced by Garret “Jacknife” Lee (Snow Patrol, U2) and features special guests Eddie Vedder, Patti Smith, and Peaches. “We wanted to put more variety into it and not limit ourselves to any one type of song,” Mills told SPIN. “There are some really slow, beautiful songs; there are some nice, mid-tempo ones; and then there are three or four rockers.”

He added: “[It’s] a very personal, very human record. Not only to [singer] Michael [Stipe], but personal and human in the sense of the narrative of the songs, the protagonists of the songs.”

What do you think of “Discoverer”? Tell us in the comment section below.

Collapse Into Now tracklist:
“Discoverer”
“All the Best”
“Uberlin”
“Oh My Heart”
“It Happened Today”
“Every Day Is Yours to Win”
“Mine Smell Like Honey”
“Walk It Back”
“Alligator Aviator Autopilot Antimatter”
“That Someone Is You”
“Me, Marlon Brando, Marlon Brando and I”
“Blue”