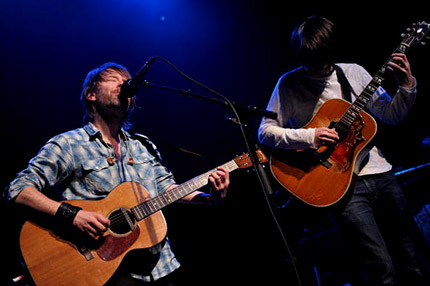 Chances are the rock gods didn’t hit eBay or Craigslist to buy you one of the $1,500-plus tickets to Radiohead’s Haiti benefit show last January at Los Angeles’ 863-person capacity Music Box Theatre — surely one of the Oxford band’s most intimate gigs this decade. But, now you can have the next best thing: fan footage of the two-hour, 24-song set, edited into a DVD-length film and sanctioned by the band. Watch below!

The show, one of SPIN’s best concerts of 2010, was full of an “ebullience that made the floorboards seem miles beneath the whole production,” wrote SPIN’s Chris Martins. An A-list crowd that included Justin Timberlake, Jessica Biel, and comedian Aziz Ansari all gathered for the gig, the proceeds from which were donated to Oxfam. The grand total?As Yorke announced with an astonished, “Fuck me!” – a cool $572,754.

You can watch the concert right here, or download it for keeps at Inez4Bears — you can grab both the video and audio from the concert. If you decide to download, Radiohead is encouraging fans to get into the holiday spirit and donate to Oxfam to help with the continuing relief effort in Haiti.