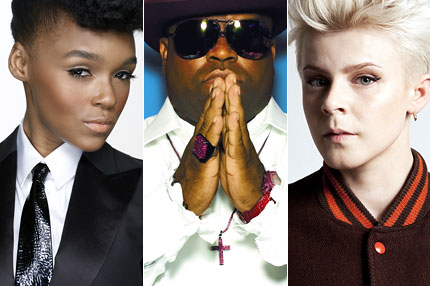 LES SAVY FAV, “LET’S GET OUT OF HERE”
Flashback to the early-’90s’ cash-grab half-light when flannelphobiclosers were desperate for a hang-out-the-car-window rock refrain not burdened with a singer who sounded like he was taking the piss or threatening suicide. Or, as Les Savy’s Tim Harrington roars over this coiled riff, “We’re here today!” Fin.

DAS RACIST, “HAHAHAHA JK?”
Over a Days of Our Lives-sampling beat from Drake/Eminem hitmaker Boi-1da, these Brooklyn street-fashion theorists are still (not) joking and provoking with Wiki-maniacal glee.

TRACEY THORN, “HORMONES”
Jaunty piano, handclaps, and Thorn’s soothing alto veil a knee-buckling mother/daughter realization. “Yours are just kickin’ in / Mine are just checkin’ out,” quavers mom, not so drily.

CHIDDY BANG, “OPPOSITE OF ADULTS”
Philly duo give MGMT’s “Kids” a second childhood with hip-hop’s most purely joyful cartwheel in years.

SUPERCHUNK, “DIGGING FOR SOMETHING”
The guitar riff wiggles and strains to soar (and sorta does), but we’re too busy dancing on the propane tanks and throwing beer cans at the crash cymbal to care.

DOM, “LIVING IN AMERICA”
A synth-fuzz jihad vs. Uncle Sam’s nihilistic horndog fantasia. Or a rock’n’roll bro-shake in its honor.

ROBYN, “CRY WHEN YOU GET OLDER”
Sweden’s improvement on Madonna has something on her dirty mind, and it’s the most honest lovesick advice you’ll ever hear in a pop song.

ARCADE FIRE, “READY TO START”
Almost a decade after Win Butler’s moveable hoot set out to conquer the world’s stadia, this smoldering screed sounds like a nail-it-to-the-door manifesto.

CEE LO GREEN, “FUCK YOU”
Appropriately, 2010’s most memorable song first existed as a goofy Internet novelty. But due to its universal sentiment, Cee Lo’s holy-rolling gusto, and the year’s shit train of woes, it actually resonated: We’re broke, we’re pissed, and we wanna curse out anybody who acts like they’ve got the slightest inkling; or, we could just cue up this hilariously ebullient, timelessly soulful middle-finger salute, and go about our fucking business. Thanks, Preacher Green, you win.