FIND NEW MUSIC: These lesser known records are some of our favorites from 2010. 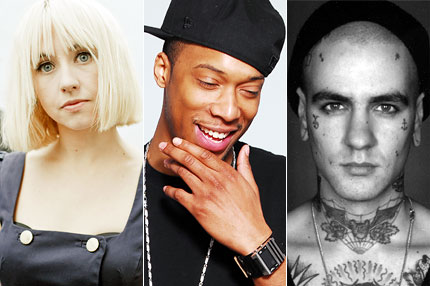 While our annual Best Albums list and Best Songs list tap directly into the year’s musical zeitgeist, there are always additional records whose impact isn’t as widely felt, but are absolutely worthy of being championed. And while these 10 artists have been beloved and lauded considerably less than, say, a certain Chicago-born rapper, or a Canadian collective with a penchant for concept albums, they’re no less deserving of appreciation from us, or you. Enjoy!

BONUS! Download our FREE mixtape featuring a song from each of these albums! Just enter your email address in the widget below and check your inbox for your download link.

After years of label battles (which left his second album, Love for Sale, on the shelf… still), neo-soul singer-songwriter Bilal Oliver unloads on his emotional, confessional third release, which nabbed a Grammy nom for Best Urban/Alternative Performance. A onetime member of the ?uestlove-led collective Soulquarians, which breathed life into vital albums like D’Angelo’s Voodoo and Erykah Badu’s Mama’s Gun, the Philadelphia-based crooner strings dark tales, including the mourning story of a foster child turned crack-addicted prostitute, with layers of his reedy yet smooth voice.

Black Milk
Album of the Year

Well, not quite Album for the Year, but it’s pretty damn good. The Detroit MC and knob-twiddler born Curtis Cross made his name collaborating with hip-hop heads like Slum Village, J Dilla, Canibus, Lloyd Banks, and Pharoahe Monch, but here he’s starting to make a name all for himself. Rappers like Royce da 5′ 9″, Elzhi, and D-12’s Mr. Porter all make appearances, but the spotlight is on Milk, who drops a stentorian flow over a lively mix of hip-hop styles and instrumental funk, with loose beats, crashing cymbals, and pounding bass drums.

With his sorrowful, self-deprecating, and charming pop-folk songs with catchy keyboard melodies and lyrics about squandered love, Fences, aka Seattle troubadour Christopher Mansfield, found a fan in Sara Quin of Tegan and Sara, who signed on to produce his self-titled debut. “Everything that Chris writes, melodically and lyrically, has that rare balance of patience and urgency that I love in honest, haunting pop songs,” Quin told SPIN. Agreed.

He grew up gay and alienated from a religious family, struggled with his unnoticed (and now defunct) band the Czars, and hid his pain in addictions to booze and drugs. He contemplated suicide and nearly gave up on music. Then he met Texas folk rockers Midlake. Together, they recorded an elegant, deeply personal album about human suffering and alienation, deeply rooted in the ’70s-style soft rock (flutes, keyboards) that Midlake has mastered. But it’s Grant’s rich baritone that carries the weight, gracefully.

There’s only three members. Their debut EP was recorded in a bedroom. Singer-guitarist Ritzy Bryan is a blonde pixie no taller than 5’4″. But this Wales-born, London-based band’s sound is massive, like football anthems for introspective indie rockers. With throbbing overdrive bass, airy shoegaze guitars, drums that explode like artillery, and Bryan’s showstopping vocals, they do justice to the term “power trio” — and live their sound is even more urgent. And stay tuned: the Joy Formidable will release their debut album, The Big Roar, in 2011.

Land of Talk
Cloak and Cipher

This Montreal indie rock outfit led by guitarist-vocalist Elizabeth Powell made this list in 2008 with their debut, Some Are Lakes. But their sophomore effort is even better. Written and recorded during Powell’s recovery from a vocal hemorrhage, with help from members of Arcade Fire, Stars, and Besnard Lakes, Cloak and Cipher expands the band’s sound, ranging from abrasive post-hardcore to tender laments with drum machines and run-my-heart-through-a-cheese-grater lyrics.

Quest for Fire
Lights from Paradise

On their excellent second album, these Toronto riff overlords combine swirling space rock, spectral atmospherics, and ominous drumming that could easily have been pounded out by a bloodthirsty Viking ship captain. In other words, it’s the perfect soundtrack for inhaling a six-foot bong hit in your parents’ basement then looking at blacklight posters. Their veteran line-up (Chad Ross and Andrew Moszynski of the Deadly Snakes and Mike Max from Canadian metal monoliths Cursed) puts one rippin’ live show, too.

With a Czech orchestra, six-foot Japanese Taiko drums, a 13-piece brass section, a children’s choir, a woodwind ensemble, and chants about labyrinths and medieval knights, the second album from this English foursome is almost ambitious to the point of absurdity and artistic ruin. But instead, it isn’t. Frontman/songwriter Jack Barnett and Co. pull it off with style to craft one of the most unique, inventive, and dazzlingly grand albums of the year.

Tracey Thorn
Love and Its Opposite

She sang “And I miss you, like the deserts miss the rain…” on Everything But the Girl’s 1994 smash “Missing,” but on Tracey Thorn’s second solo album following an eight-year hiatus, love is a bit more complicated: Divorces. Singles bars. Long-term relationships. At 47, married with kids, life has changed and so has her music. With help from Berlin-based producer Ewan Pearson (Moby, Goldfrapp, Depeche Mode) she ditches electronica for folksy chamber-pop with atmospheric pianos, keys, and guitars (and guests like Hot Chip’s Al Doyle and Swedish singer-songwriter Jens Lekman).

It’s Cat Power with sharper claws. This Brooklyn-via-Tennessee singer-songwriter is “love sick and sick of love,” we wrote in Epic’s 8-out-10 review. She beefs up her melancholy acoustic ditties with piano, mellotron, harmonium, and drums, but it’s her acerbic lyrics that lead, transmitting disillusionment and heartbreak in devastating candor. “To say the things I want to say to you would be a crime / To admit I’m still in love with you after all this time / I’d rather let you touch my arm until you die.” Oof.