Pleased.we.are to talk with the ingenious frontman about the diverse influences on the band's upcoming release. 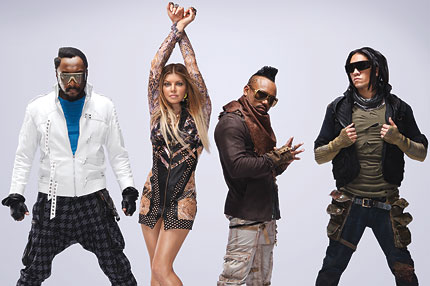 “Boom Boom Pow.” “My Humps.” “I Gotta Feeling.” It’s easy to hate on the Black Eyed Peas for making mindlessly fun pop music for the JerseyShore set. But it takes true skills to write hit music, and while most musicians would kill for just one hit song, the Peas had five Top 10 singles off their last album The E.N.D. alone.

On November 30, Will.i.am, Fergie, Apl.de.ap, and Taboo will return with a new album The Beginning. And the record finds the group going in an out-there, almost-avant-garde direction. Sure, they rejigger the Dirty Dancing song “I Had The Time of My Life” on lead single “The Time” – but they also use samples of classic songs by Chic and Slick Rick while pushing catchy synth melodies and Auto-Tune-heavy vocals to the extreme. It’s the sort of eclectic album that art-rockers, club kids, and B-boys could get behind.

“Our last record was just, ‘Yo! We’re making crazy beats – party, party, party!” Will.i.am tells SPIN.com. “This one is more inspired by electro and dance music – it’s the only thing alive at the moment. There are some songs where we’re going all the way, but we mix it up. Some songs are 120 BPM and others are like 320.”

He says the Peas’ main goal was to connect the greatest music of the ’80s to more modern sounds. “The 80s was very unique – it launched humanity into hyper mode,” says Will. “From then to now, we’ve transcended to a totally different culture, like, ‘What?’ Now we have high-definition, 3-D animation whereas the beginning was Tetris and Space Invaders. How did Space Invaders become Madden NFL. That’s what we’re doing – we’re connecting the pixels.”

Working with producers like David Guetta and DJ Ammo, the Peas cut the record all over the world, in hotel rooms while on the road and after Will.i.am’s late-night DJ gigs, where he tested out many of the album’s beats on the crowd. Tracks like “The Time” were recorded on the fly so there’s a homespun, DIY vibe coursing throughout. “We had no speakers so I had to hi-jack the hotel television set and plug my computer into it,” says Will. “I needed a new beat because I had to go DJ that night.”

SPIN.com caught up with Will.i.am. to break down some of the album’s highlights:

“Do It Like This”
Like the two-part techno-funk epic “Imma Be,” the Black Eyed Peas splice together two club-ready jams into one five minute track. “Do It Like This” was months in the making. Will had left-over beats from working with Usher on “Oh My God” so he wanted to sample fans’ opinions before using them on Black Eyed Peas’ new tunes. After DJ’ing one night in Toronto, Will brought back strangers to play them his creations. “I told them, ‘Don’t be afraid to say its whack. Don’t tell me it’s cool because you’re being polite,'” says Will. “So I played them music and everybody was like, ‘Ugh!'”

Still, Will stands by the beats that make up “Do It Like This,” which has a dizzying, minimal German techno vibe. “I don’t care if you’ve shot a billion people and I don’t care if you’ve sold crack to the Pope,” says Will. “That beat is harder than any attitude or any freakin’ mug-shot face. It goes to a place no hip-hopper would go to right now.”

“XOXOXO”
The wildest song on the record, “XOXOXO” is four minutes of robotic voices, icy synths, skeletal beats and Will wooing a lady via text message with hilarious lines like “Girl, you stole my heart like a klepto / Butterflies in my stomach, need Pepto.” Will says he wanted to make something totally unlike “I Gotta Feeling,” where each member had easily-identifiable vocals. So he crafted a hook so saturated in Auto-Tune, it’s impossible to tell if it’s Will or Fergie singing on the chorus. “We wanted to use the combination of our voices, which is unique,” he says. “It’s not about who’s singing what part. A lot of times, people fall short in the studio worrying about who gets to sing which part.”

“Fashion Beats”
An undeniably catchy dance number featuring Fergie’s sex-kittenish, Debbie Harry-esque vocals. The disco and funk pulse is authentic: Will cribbed a sample of Chic’s 1979 classic “My Forbidden Lover” for this tune. “Fergie’s all like, ‘Faaaaaashion!'” says Will. “It’s crazy fresh!”

“Don’t Stop the Party”
A buzzing, hot club jam that features whoosing synths and slap-funk bass grooves. Will’s lyrics are some of his funniest yet: dude manages to rap “lyricals” and “digital” with “aboriginals” and “genitals” in a thick, Caribbean patois. It’s the longest track on the album at close to six-minutes – but Will is proud enough of the song that he’d even play it for Jay-Z. “I would go to Jay’s studio and play this be like ‘Boom! Check it out!,’ says Will. “Then I go dirty Caribbean on him on the last verse.”