The Cleveland rapper plays "Maniac," off his upcoming release The Legend of Mr. Rager. 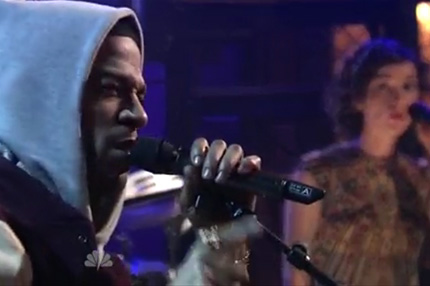 Kid Cudi wants to front a rock band — and Thursday night he got his chance.

On Late Night with Jimmy Fallon, Cudi — who dresses up as Jimi Hendrix, experiments with arena-filling rock sounds on his new album, and recently said he’s forming a band — debuted “Maniac” with an electric guitar slung over his arm (nice solos, dude!), and a little help from the Roots, indie tinkerbell St. Vincent, and rapper Cage. Watch below.

The song, off Cudi’s November 9 release Man on the Moon 2: The Legend Of Mr. Rager, is dark and moody with intertwining rhythms, a whole bunch of keyboards, and some slick guitar lines. It samples St. Vincent’s “The Strangers” and deals with lyrics of mania — fitting, considering Cudi’s recent freakouts on cocaine (resulting a run-in with the law) and the fact that Cage was once a psych ward patient. Now that’s rock’n’roll.

Watch the performance below, then sound off in the comment section.