The aerobic Swede wows a chilly crowd with the full range of her talents. 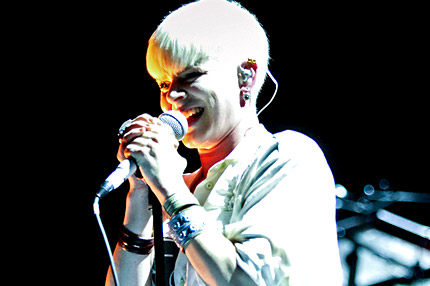 For an electro-pop pixie from Sweden, the low 60s temperatures that seized Miami Beach on Friday night must have felt like home. But in this region, such frigid conditions tend to spook the thin-skinned hipsters. It’s their loss. Because in the first show on her North American tour, Robyn gave her hardcore fans a hurricane performance.

That fan base was awfully rowdy. With the first few notes of “Fembot,” the gyrating contingent turned the Miami Beach Fillmore’s orchestra pit into a sweaty mess.

Still, they couldn’t keep pace with Robyn herself. Dressed in a cut-off hockey sweatshirt and stretch pants, she might have been leading a group exercise class — a damned good one considering the way her beats caused the most lethargic audience member to move.

Backed by two drum sets and two synth sets, Robyn’s glittery voice kept its pitch and a perfect pace, as she blew through “Include Me Out” and “Cobrastyle.”

She didn’t waste much breath with chitter chatter, although toward the end of “We Dance to the Beat” Robyn interrupted her aerobics to peel a banana on stage, to the accompaniment of shrieks from an audience that can appreciate suggestive props. After a few bites she shared the fruit with some new friends in the front row.

Eschewing the headset for a microphone was a wise choice, especially when Robyn slowed for more intimate songs like “Indestructible” and “Dancing on My Own,” a song that works much better in this setting than on Gossip Girl.

Robyn followed that hit single with “Be Mine!” from her self-titled 2005 album. Judging by the subdued reaction, this crowd has yet to fully explore Robyn’s pre-Body Talk oeuvre.

But they rediscovered their groove after the first encore, when Robyn bounded out for “U Should.” No, the ubiquitous Snoop Dogg didn’t materialize, as rumored. Has he not cloned himself yet?

After a few minutes chanting “Rob-yn! Rob-yn!” the crowd was treated to “Dancehall Queen,” though she started the song with a slo-mo rendition of Abba’s “Dancing Queen,” paying homage to her North-America-conquering forbears in the realm of Swedish dance-pop.

Bringing the show — and her career to this point — full circle, Robyn closed with a near-a cappella version of “Show Me Love,” the song that launched her into pop stardom way back in 1998.

As the crowd spilled out of the Fillmore and into the midnight chill, they were still dancing to those infectious melodies. The near-unanimous review: “So good! Soooooo good!”

Setlist:
Fembot
Include Me Out
Cobrastyle
Indestructible
We Dance to the Beat
Love Kills
The Girl & the Robot
Hang With Me
Dancing on My Own
Be Mine!
U Should / Konichiwa Bitches
In My Eyes
With Every Heartbeat
Dancehall Queen
Show Me Love

Thomas Francis
Tags: Robyn, We Were There