Soul revivalist talks about producing his own tunes and his next album. 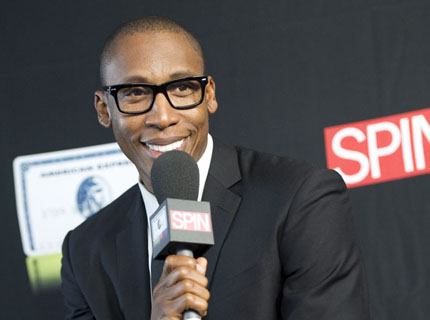 During the recent Voodoo Music Experience in New Orleans, artists stopped by the American Express® ZYNC ZONE, to chat with SPIN about their 2010 festival experiences and much more, among them soul crooner Raphael Saadiq — watch our video interview, plus performance footage below!

For most, producing their own music might bring a level of stress, but for Saadiq it’s an easier task because he’s used to being in bands where he just plays a part.

For his Voodoo Fest set, Saadiq said he’d play close to an hour, including some tracks from his yet to be released record, Stone Rollin’. “It’s a step up from the last record,” he said.”I hadn’t toured for a long time and I was producing a lot and I started to speed songs up to keep the energy going and this album has more of that energy.”

See all of our exclusive interview with Raphael Saadiq below, and click here to check out more interviews from the American Express® ZYNC ZONE!Scalable, non-watermarked