The Hawaiian singer-writer-producer talks about his new album, working with B.o.B. and Cee-Lo, and performing at Graceland. 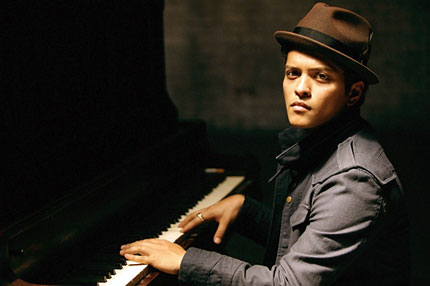 Bruno Mars has written some of pop music’s biggest hits — and now he has one of his own.

After crafting B.o.B.’s “Nothin’ On You,” Travie McCoy’s”Billionaire,” Flo Rida’s “Right Round,” and rapper K’naan’s World Cupanthem “Wavin’ Flag” with his production crew the Smeezingtons, the 25-year-old Hawaii native has gone No. 1 with “Just the Way You Are,” the lead single off his debut album, Doo-Wops & Hooligans.

Mars – ever the ladies man (check out the video for “Just the Way You Are” for proof) – talks with SPIN.com about breaking into the music business, his upcoming U.S. tour (which starts Nov 16 in San Francisco), and singing at Graceland when he was only five years old.

You’ve written songs for many different artists, from B.o.B. to rapper K’naan. How do those collaborations come together?
Well, an artist will call and ask for a song, and I’ll say, “absolutely not” [laughs]. Then they’ll call again and I’ll still say, “No.” And then the third time they call they can come in and get a song. We’ll set up an appointment and we’ll get right into the studio and just start working — but with the mindset that this song is for their album. I had a lot of fun working with K’naan on “Wavin’ Flag.” That was a beautiful experience because we got to put in lots of African percussion. We rented a big ol’ studio and a bunch of African drums that we kept layering over and over. Cee-Lo, of course, was awesome because I’m a huge fan of his. B.o.B., Travie, all those guys – I’m the greatest fan of all of them. But now that I’m promoting my own album, I’m not in the studio working with other artists. But when I get back in, the lines will be open.

Why launch a solo career now?
It was never planned. There was no game plan. I wrote the hooks for “Nothin’ on You” and I was approached by Atlantic Records. They wanted to have B.o.B. take a stab at it. I said, “Absolutely. I’m a big fan.” He came in the studio and killed it. Then Atlantic just kept me on. They rolled the dice on me. The A&R guy said, “I’m working with Travis McCoy” and asked me if I had anything. I said, “Well, I’ve got this other song,” and then I played “Billionaire” on my guitar. It just kind of happened. But then I wrote “Just the Way You Are” and decided to do it myself. So there was no real plan. That’s just how it fell together.

It must be hard letting songs that you wrote go, especially when they can be so personal and emotional.
Man… the songs I did for Cee-Lo and B.o.B. were seriously hard to let go of. Writing and performing a song comes up from my fucking soul, you know, so who’s going to sell it better than me? And I don’t mean “sell” it, like making money off it. I mean who’s going to sell it performance- and emotion-wise, you know? I’m producing this shit. This is my art.NEXT QUESTION: You got involved with music at a young age by singing in your family’s band.

Yeah. My father used to have a 1960s rock’n’roll show and I grew up in that lifestyle. My mother would sing. So I watched it as a kid and I’m begging Dad, “Put me up onstage! Put me up onstage!” Finally he brought me up. I was like two years old and I started dancing. People got a kick out of it. Soon I was up there every night, and finally they worked out a little segment for me in the show. I would put on an Elvis costume and sing Elvis Presley songs.

Have you ever been to Graceland?
[Laughs] Yeah, actually. I was invited there to perform when I was about five years old. Apparently the people at Graceland hate Elvis Presley impersonators, or they used to, but I was invited to perform at some banquet. Priscilla Presley was there!

Before stepping out as a solo artist, when was the last time you regularly performed live?
I had a band with my brother and a guy by the name of Jeff Bhasker, who’s an incredibly talented producer who works with Kanye now. We would play pubs and bars in Ventura. I wasn’t even 21 yet, but I got into these bars to make some loot. We were a straight up bar covers band. We were just a three-piece but we fuckin’ rocked. We were called Sex Panther. You would come up and request a song and we’d take it. That’s what I was doing before I got signed. Then all of a sudden Jeff Bhasker gets a gig with Kanye West, as his keyboard player, and the band broke up. But we’re playing a reunion tour really soon [laughs]!

How did you make the jump from bar band to working with some of these big-name artists?
Phillip Lawrence [Smeezingtons collaborator] and I would weasel our way into recording sessions. We would tell people we were songwriters and I would go in the studio and do our best to write a song. Soon we got a little buzz, you know, people started talking about us, saying, “There are these guys that come to the studio and write pretty good songs.” So we started jumping from session to session and working with other producers. We would listen to a beat or track and try to write a song over it. We had a little success doing that, but there’s no money in that for writers unless the song is a massive hit. Even then you have to wait for residuals. So we came to a conclusion. It was like, “Look, man. We’re going broke. We can’t even afford gas to get to these sessions. The only way this shit is going to work is if we start producing these songs ourselves. I can play the chords that these guys are playing. If we could just get our hands on a studio, we’ll produce it. We’ll be a one-stop shop — we’ll produce and write the songs.” That’s when everything changed. When we started that, everything got a lot easier for us. It was a little more natural and a little less forced. There was a lot more freedom and our songs improved.

What do you love so much about doo-wop?
It’s the simplicity of the music. In my songs I’m not saying something that’s never been said before. The have lyrics aren’t going to blow people away. It’s the emotion and the melody that drive it home. So many doo-wop songs do that, like the Flamingos’ “I Only Have Eyes For You.” I was listening to that when we started writing “Nothin’ on You.” I wanted to get that sound. When that chorus opens up [sings into phone] “I only have eyes for you,” it’s just, “aaaaaaaaaahhh!” What woman doesn’t want to hear that? That’s where my style comes from when I’m writing. It’s all about the execution.

If you could collaborate with anyone, who would it be?
Man, that changes every week. Well, I’d love to jump into the rock world. I’d do something with the Kings of Leon.

How many fedora hats do you own?
At this point I’ve got two.

Two? That’s it? You’re wearing a different one in every photograph.
[Laughs] Oh yeah. But I’ve wore them so much that they all disintegrated!