The singer talks about his upcoming solo tour - and his favorite pop star not named Katy Perry. 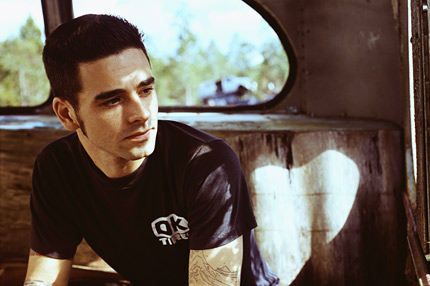 A few years ago, Chris Carrabba walked into a packed club near his Boca Raton, Florida, hometown to play a solo show, with no game plan or setlist in mind. Since releasing Dashboard Confessional’s 2003 breakthrough A Mark, A Mission, A Brand, A Scar, Carrabba had grown used to touring with a full backing band in much bigger venues – a stark contrast to the stripped-back, intimate acoustic shows that originally put him on the map as one of indie’s hottest new songwriters.

“It was very hot, very overcrowded, way too many people for the fire code,” Carrabba tells SPIN of that particular hometown gig. “It really reminded me of the different energy you draw upon yourself when you play alone. It’s great – and it’s terrifying.”

Carrabba is going back to those roots when he hits the road for a 17-date solo tour (starting Nov. 27 in Ft. Lauderdale), which will find the 35-year-old songwriter celebrating the tenth anniversary of his debut album The Swiss Army Romance by performing it in its entirety. (He’ll also be playing a second set of covers and fan favorites.) The venues will be intimate, including the Stone Pony in Asbury Park, New Jersey, Boston’s Paradise, andChicago’s Bottom Lounge.

SPIN caught up with Carrabba to discuss revisiting these old songs, how Townes Van Zandt and Bruce Springsteen impacted him as a young songwriter, and why he likes to listen to Katy Perry.

What have you done to prepare for your tour?
I’ve played the songs a couple of times in the order that they appear on the record. Well, I’ve nearly done that. I’ve left a couple out on purpose. I like the spontaneity. It’s ten years of playing these songs and I want them to be as fresh as possible.

In terms of getting ready for the tour, I packed yesterday.

What are you bringing with you?
A pack of t-shirts. I’m a notoriously light packer. I debated over whether to take one or two pairs of jeans. I’m going with one. I may decide to bring another [laughs].

Do you have any sort of lucky charm, like a rabbit’s foot?
I could get in trouble with some animal rights activists if I took a rabbit’s foot. You know, touring is the dominant part of my life. I feel more comfortable doing it than anything else. So, going back on the road is a chance for me to feel normal again.

What was your initial reaction going back and listening to Swiss Army Romance?
I haven’t yet! I keep putting if off. I know I probably sound young. I was young. I was inexperienced when I made that record. I wasn’t quite sure how to sing without screaming. If I listen to it on the wrong day – embarrassment is a bad word, but there’s an acknowledgement of my youthful inexperience. There’s a different guy singing on those records. I haven’t visited with him again quite yet.

Can you still hit those crazy high notes at the end of “Turpentine Chaser”?
I think I can hit them with more accuracy – I’ve learned how to sing since then. It’s funny you mention that song. There’s this beautiful gracelessness that happens at that moment. It’s completely unrestrained, because if I had been restrained I wouldn’t have hit that note. Maybe I’ve become a stronger singer, but I have to find a way to punctuate those moments with the same heartfelt spirit.

Your friend Jolie Lindholm provided backing vocals on your first two albums. Have you asked her to join you for some of these upcoming shows?
No, but maybe I’ll give her a holler. That’s not a bad idea. I was approaching this in terms of how I used to tour – I used to tour without Jolie. But now that you mention it, it seems so obvious. That’s a great idea.

Who was the first person you played Swiss Army for?
Amy Fleisher, who ran Fiddler Records [and released the album in 2000]. I remember playing it for her in my Ford pickup truck. The second person I remember playing it for was [Dashboard bassist] Dan Bonebrake. We were driving down a highway and just as the last note rung out, we got rear-ended by a drunk driver. We ended up chasing him down for several miles.

Wow.
Yeah, it’s par for the course in South Florida.

Your fans are notoriously devoted, erupting into deafening sing-alongs at your shows. What music strikes you in a similar way?
Well, there are songwriters who have been important for milestone moments in my life. I don’t know a better way to say that. Songwriters who have a strong connection to my life experience. There are many Bruce Springsteen songs I feel illustrate my experiences.

Which songs or albums in particular?
Nebraska, but that might be because it’s the one where he played into a tape recorder with an acoustic guitar.That record is a canvas that touches on every color of life. Another songwriter who I have a very personal connection to is Townes Van Zandt, but that’s not a secret. “If I Needed You” is my favorite song of his, and has been for many years.

Who introduced you to Townes?
The first time I heard him was in my friend’s dad’s Dodge pickup and I remember thinking it was so hokey. But he’s a pretty underappreciated guitar player in that style of Travis picking. And I was a guitar player who knew nothing – not even how to hold a pick. I remember when my friend’s dad said that it was one guy playing, and it just blew my mind.

What about Top 40 pop music – any artists you throw on for mindless fun?
Katy Perry and Kelly Clarkson. I think they’re the best singers in the pop world. There’s a lot of soul and such richness in those voices and their music is an easy route to escapism.

Have you started working on a new Dashboard record?
I’m always writing songs, but I don’t think I’ve written the first song that seems like a new enough of a direction. With the last album, that happened with “Get Me Right.” It turned the course. At that point, I had about 30 songs and I thought I’d written the record two times before I realized it was just the beginning. I haven’t found that one song for the new album yet.