My Chemical Romance Bounce Back from the Brink

They scrapped a whole album, lost a drummer, and are besieged by pesky Draculoids. Why is it that the crazier things get for My Chemical Romance, the happier they seem? 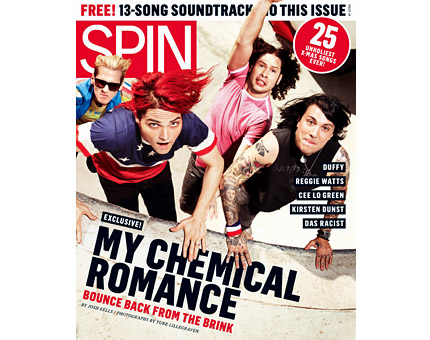 They scrapped a whole album, lost a drummer, and are besieged by pesky Draculoids. Why is it that the crazier things get for My Chemical Romance, the happier they see? [Magazine Excerpt]

Around this time last year, all Gerard Way could talk about was how different the next My Chemical Romance record was going to be. The band were coming off two long years supporting their 2006 album, The Black Parade, a rock opera about cancer and dying that sold more than three million copies worldwide. The two albums before that, 2002’s I Brought You My Bullets, You Brought Me Your Love and 2004’s Three Cheers for Sweet Revenge, were also conceptual, chronicling a couple’s journey to hell after dying in a desert shoot-out. But the new record, Way kept promising, was going to be back to basics. No epic plotlines. No crazy uniforms. No makeup. And definitely no shoot-outs in the desert.

Thus it is with no shortage of irony that the four members of My Chemical Romance find themselves in the Joshua-tree scrublands of Southern California, preparing to have a shoot-out in the desert. It’s a Wednesday in September, 99 degrees, and My Chem are in the parking lot of an abandoned gas station 65 miles outside L.A., filming the video for their awesomely titled single “Na Na Na (Na Na Na Na Na Na Na Na Na).” They’re decked out in color-coordinated leather jackets and Mad Max biker boots, and carrying matching Duck Hunt–style laser guns. And they’re preparing to do battle with a bloodthirsty pack of evil vampires.

But hey — at least they’re not wearing makeup.

So, about that whole back-to-basics thing: Who were they kidding? No band does big quite like My Chemical Romance. They love to commit, the more outlandish the idea the better. Want to cruise through the Mojave fighting bad guys? Sure! In a vintage Trans Am painted like the American flag? Okay! Driven by a stuntman from The Fast and the Furious? Why not? Wearing outfits that Way created with Tim Burton’s costume designer? Fuck it! (Fans will have a chance to see the Trans Am themselves when the band bring it along on their upcoming arena tour, while a $70 box set of the new album comes with replica ray guns.)

My Chem’s opus is called Danger Days: The True Lives of the Fabulous Killjoys, and it’s exactly as over-the-top as that title would lead you to suspect. The premise? The year is 2019, and some unspecified environmental catastrophe has befallen America. The survivors are ruled by a nefarious corporation called Better Living Industries, which employs an army of masked vampires called Draculoids. It’s up to our heroes, a motorcycle-riding gang of “rogue artists” called the Killjoys — a.k.a. My Chem — to save the day.

“It’s high concept,” explains guitarist Frank Iero, 29, “but it’s not a concept record.” Met with a look of not-quite-comprehension, he laughs like a man who’s been there himself. “Yeah,” he nods. “When Gerard says it, too, I go, Okaaay…” But the band trust their frontman. “He likes to say we’re his bullshit detectors.”

“Gerard has a cool mind,” says guitarist Ray Toro, 33. “He’s tapped into things people are thinking about before they even know it.” Way conceives of the band’s looks, codirects their videos (this one with Nate Weaver and someone named Roboshobo), and even scoured costume stores for the Draculoids’ masks. “He’s the master, the dreamer-schemer, the giant beating heart,” says Rob Cavallo, the album’s producer and the new boss of Warner Bros. Records. “He almost reminds me more of Robert Rodriguez or Tarantino than any musical person — he’s an auteur.”

“I don’t know what he’s not good at,” says Mikey Way, 30, MCR bassist and Gerard’s little brother. “He wasn’t trained for any of it, but he’s amazing at all of it.” A few years ago Gerard, 33, wrote a comic book, The Umbrella Academy, that won the medium’s equivalent of an Oscar; now he’s helping adapt it into a film. He’s also writing a Fabulous Killjoys comic book and recently pitched a Hollywood studio on another idea, based on a fairy tale.

Yet to Gerard, today running around in mirrored aviators and white jeans turned brown by dust, this kind of omnivorousness is the most natural thing in the world. “I love it all,” he says during a break between setups. “There’s not a lot of art forms where you can control your presentation and your ideas. I mean, you spend two years working on a record. Why wouldn’t you spend two years working on everything else?”

The next afternoon, Way answers the door to his home in Los Angeles’ Mt. Washington neighborhood in aqua-blue socks, a sleeveless black tee, and a pair of black cutoffs that would violate most school dress codes. The house, which Way and his wife, Lindsey, bought on Valentine’s Day 2008, is cozy and secluded, with stucco walls and lots of exposed wood beams. It was built in the ’30s by a woman from Mexico who made her fortune in the crouton business (“the Colonel Sanders of croutons,” Way jokes), and a sign over the front gate still testifies to her grateful good vibes: CASA DE MIS SUEÑOS — House of My Dreams.

“You want to take the tour?” Way asks, an unlit Marlboro between his lips. The first stop is his office, stacked floor to ceiling with comic books, novels, and DVDs. On the desk next to his computer there’s a life-size replica of a Boba Fett helmet, and hidden in a closet somewhere, a collection of droids. Way grew up in New Jersey, in an area where riding bikes wasn’t safe, so he and Mikey had to invent their own fun, acting out Star Wars movies (usually The Empire Strikes Back, on account of the snow) and episodes of G.I. Joe. Gerard even remembers sending off sketches for action figures to the good people at Hasbro. (They never responded.)

Outside the bathroom — where a potty-training toilet sits on the floor — Way has to swerve to avoid stepping on a stuffed Elmo doll. In May 2009, Lindsey, who plays bass with electro-punks Mindless Self Indulgence, gave birth to their first kid, a daughter named Bandit Lee. Way says he loves everything about fatherhood, even changing diapers, with just one exception. “I’m not great at giving baths, because it makes me nervous. I don’t want to bang her head. Lindsey calls me Safety Inspector. My whole life I was protective of Mikey because I felt that was my job, and that’s totally transferred to Bandit.”

For his day gig, he’s the same way. In My Chem’s music, Way casts himself as a kind of safety inspector of emotions, plugging baby-proof stoppers into the electrical sockets of adolescence. On The Black Parade he dubbed himself “the savior of the broken, the beaten, and the damned,” and he established for the band the modest goal of rescuing the world. “I thought if we made an album that tried to change the world, or give it hope, it would really happen,” Way says, cheerfully. “But all people found was death and destruction and misery and self-hate. I learned that the world doesn’t want to be saved, and it will fucking punch you in the face if you try.”

We make our way downstairs, through the master bedroom (fireplace, unmade bed, framed black-and-white photo of a romantic-looking couple splattered by blood), and into the backyard. It’s a magnificent place, with a stunning canyon view. “I never really come out here,” he says a little sheepishly as we poke past a small grove of orange trees, the fruit overripe and unpicked. Near the bottom of the hill there’s another tree, boasting an oddly shaped green fruit. Way stops short. “I’ve never even seen this before.” He plucks one and takes a bite. “It’s an apple!”

For a guy who once famously sang, on their breakthrough single, “I’m Not Okay (I Promise),” that he was “not o-fucking-kay,” Way seems…well, pretty okay. I ask him what he’d say now to the kid who wrote that song, and he laughs. “I would say, ‘Fucking lighten up, dude! Don’t torture yourself. You’re going to meet an awesome girl and have a daughter, and when that happens, make sure you’re fucking happy.’?” But these days, he’s charmingly self-mocking about the idea of “trying to win the world over with a musical, wearing marching-band uniforms, and singing about our feelings.”

In 2004, just as the band was getting huge, Way had a bad night of boozing and pill-popping in Japan and decided to quit drugs and alcohol cold turkey. Recently, though, he’s been enjoying the occasional drink. It’s not about the high, so much as loosening his own self-imposed restraints. “[Sobriety] became such a thing,” he says. “It was so goddamn important to everyone but me. You start to feel like the two guys in the Smiths who wanted to eat cheeseburgers but had to pretend not to. I understand that kids look up to me, that some people might have gotten sober because of me. But it’s not an important thing for me anymore.”

You’re no one’s savior, you mean.

“Hell no.” He pauses. “But that was a fun image to play with. Because even if you miss the mark, you’re probably gonna be a pretty remarkable person. Shoot for savior, and end up being rad.”