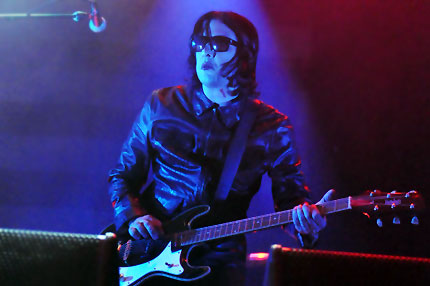 Twiggy Ramirez, aka Jeordie White, Manson’s longtime guitarist, who, after a seven-year break, rejoined the band in 2008, spoke about their upcoming release backstage at a benefit gig for Dimebag Darrell in Los Angeles. “It’s kind of like a little more of a punk rock Mechanical Animals [Manson’s 1998 third album],” he told Eric Blair of The Blairing Out With Eric Blair Show. [Via Blabbermouth]

“It’s fantastic,” he added. “It’s our best record yet, I think. I mean, everyone always says that, but I think this is our best work so far.”

Ramirez added that the album was “almost done” and would “probably be out next year.” He also discussed the reunion of A Perfect Circle without him. “I might do a song or two with them at an L.A. show,” said Ramirez, a onetime bassist for the alt-rock supergroup. “But for the next couple years my priorities are with Marilyn Manson.”

The upcoming Manson release follows 2009’s The High End of Low, which SPIN editor Doug Brod praised for its “15 necromantic vamps, mass-murder ballads, and stormtrooper anthems. He hasn’t sounded this vital — and tuneful — since Mechanical Animals.”