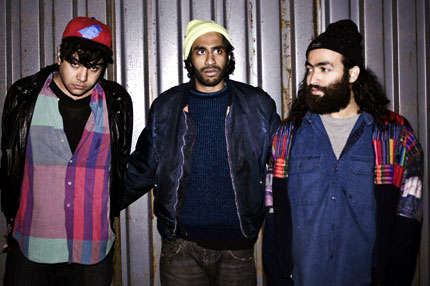 Brooklyn rap trio Das Racist have turned their is-this-for-real? track “Combination Pizza Hut and Taco Bell” into a bonafide hip-hop career — and tonight the guys will celebrate their steady rise with a 30-minute performance at SPIN’s New York City office. You can watch the live stream here, starting at 8 P.M. EST.

Since “Combination Pizza Hut and Taco Bell” exploded on the web in early ’09, the trio – MCs Victor “Kool A.D.” Vazquez and Himanshu Suri, a.k.a. Heems, plus their hype man Ashok “Dap” Kondabolu – have racked up millions of YouTube views and dropped two new mixtapes, Shut Up, Dude in March and Sit Down, Man in September, the latter of which features production by Diplo and Dame Grease, and was downloaded more than 40,000 times in its first week of release.

The effort landed them a Breaking Out feature in SPIN’s December issue. Read the story here.

Das Racist are also renowned for their live performances. So don’t miss it.

Watch the live stream at 8 P.M.