Ke$ha On Her Haters: “I’m Not Going Anywhere”

The singer opens up about getting bullied as a kid, why pop music is the best revenge, and her wild antics on the road. 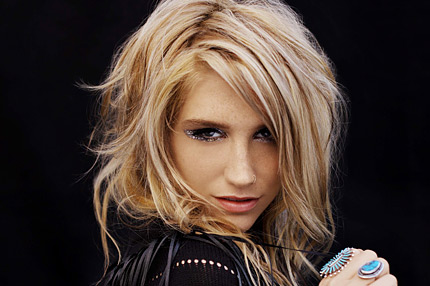 Ke$ha may be a pop star, but during her performance on Sunday’s American Music Awards, she lifted a move straight out of the classic rock playbook. “Smashing my guitar felt fucking amazing,” says the 23-year-old, who bashed her white axe into the stage after busting out a Spring Break-appropriate version of “We R Who We R,” the chart-topping first single off her new album, Cannibal.

But Ke$ha says there was a message behind the destructive act: Scrawled across the back of her guitar, in bold letters, were the words “Don’t Hate.” “Young people need a role model to tell them they’re beautiful exactly the way they are and that they don’t have to be apologetic about themselves,” says Ke$ha, who wrote the song in response to the recent spate of gay teenagers committing suicide. “So I wanted to write a super-positive anthem. Plus, in rock ‘n’ roll, destroying shit is awesome.”

Your dress at the AMAs was interesting.
It was made out of VHS-tape innards. When Nashville flooded earlier this year, all my favorite VHS tapes from when I was little – Wayne’s World, The Lost Boys – were in my basement and got destroyed. I was watching Lost Boys recently and thought, “I should wear the insides of this tape as my dress at the AMAs.” All my dancers had Kiefer Sutherland mullet-mohawks, too. The idea was to create a very dark world of hot vampire people – some of whom are boys wearing high heels and fishnets. It’s a celebration of being yourself. The point is: fuck hate, fuck cynicism. It’s about time that society accepts people for who they are.

Does that bum you out?
I’m a Pisces so I used to take it really personally, but now I never go online except to check my email. Obviously there are millions of people who like me enough to listen to all the stupid shit I say. Here’s my response to haters: If you don’t like my song, then turn off the radio. Take it or leave it, love me or hate me. I’m not going anywhere.

You released your second album just 10 months after dropping your debut. Why so soon?
Not to sound like a cheese dick, but my fans are my entire life at this point because I’m always on the road. I feel like they’ve become my family. With my first album, I only had enough material for an hour-long show, and I wanted enough for a two-hour dance party that’s gonna take over the planet. Plus, I wrote songs all throughout this crazy whirlwind experience of the past year.

One track that really surprised me was “The Harold Song.” It’s such a departure from bitchy songs like “Grow a Pear,” where you tell a sensitive guy that he has “a vag.”
“Harold” is about the only guy I’ve ever been in love with – and our relationship didn’t work out, obviously. When I went to write it, I locked myself in a room and cried like a little bitch. I can’t even listen to it. But I wanted to do a vulnerable song because it’s a side of myself that people haven’t seen.

Is Harold his real name?
Oh yeah. He’s not getting away with a fake name. All men that date me have to know that their name may end up in a pop song. It’s the best revenge: you can’t get arrested for it, and everyone knows about it. And I like to be specific – I don’t want any of the other losers I’ve dated to think the song was about them.

So you’re not really as big of a man-eater as you claim to be in other songs off your album, like “Cannibal”?
When I really like somebody, it totally flips. But before I give two shits about a guy, I tend to treat him as my plaything, like a cat playing with her food before she eats it. It’s kinda fucked up.

What’s your favorite dumb pop song?
My guilty pleasure is “OMG” by Usher. He says something like, “Honey’s got some boobies like pow, pow, pow.” Just the fact that he uses the word “boobies” is horribly amazing.

What’s the strangest thing someone would find on your tour bus?
My dancers are a bunch of hot females, and whenever somebody tries to bring a dude on the bus, we make him take a Polaroid and we put it up on the wall. I haven’t counted them, but we’re covering one whole wall at the moment. Hopefully we’ll upgrade to two after my tour.

What do you have in store for the tour?
I’m throwing around some ideas right now. All I can say for sure is it won’t be like any other female pop show you’ve seen. We’re a group of rowdy motherfuckers. We like to break things, we like to jump on people off of very high things and we like to take our pants off. It’s a safe bet that I’ll be pants-less at some point. On my last tour, butts came out frequently; sometimes we mooned the audience, sometimes we pulled band members’ pants down during their guitar solos. I mean, my pre-show ritual involves covering my bod in baby oil and glitter and then my band and I high-five each other with our asses.

Any items you won’t leave home without when you’re on the road?
Lately, I’ve been wearing a person’s middle-finger bone around my neck. It’s kind of a middle finger to anyone who wants to hate. I’m not sure whose finger it was, but I hope they were cool. I also travel with a little bit of my crushed-up placenta that I wear in a necklace. According to certain religions, it gives you a sixth sense.

Doing anything exciting for Thanksgiving?
I finally get to go home to Nashville! I’ve only been home for one day in the past year – it’s fucking insane. I’m taking three days off, which is an eternity. I don’t know what I’m going to do, exactly, but I know for sure that I’m not gonna look hot for three days straight.