The duo team up for a blazing version of an Eddie Cochran rockabilly tune. 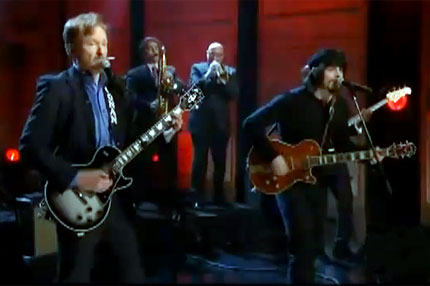 But the night’s clear highlight? O’Brien joining musical guest Jack White for a hot rendition of Eddie Cochran’s rockabilly gem “Twenty Flight Rock,” which featured one of White’s trademark face-melting guitar solos. Check it out below.

O’Brien and White’s friendship goes back years, so it makes sense that White would appear on the show with no album or project to promote. When O’Brien made the transition from New York to L.A. to take over Jay Leno’s Late Night, the White Stripes cut two albums for White’s Third Man Records and the duo performed an intimate one-off show in Nashville together this summer.