Sam Bream tames his beard - and a worshipping crowd - with a diverse and powerful set during his Southern tour. 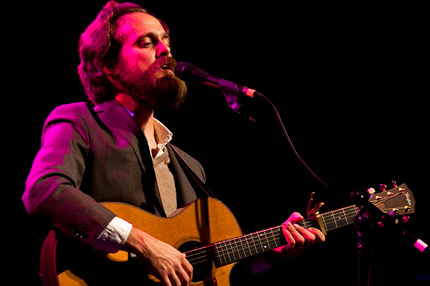 “I figure you have the records, so I gotta change it up,” Sam Beam said with a shrug and a grin about halfway through his set at Atlanta’s Variety Playhouse Tuesday night. “At least, that’s my take. Some people feel otherwise, but fuck ‘em.”

Dressed in a brown-gray suit, olive vest and white button-down, his hair tastefully combed back, the Iron & Wine main man looked professional, professorial even, harkening back to his days teaching film at the University of Miami.

For Beam, “changing it up” meant taking the wraps off four songs from the forthcoming Kiss Each Other Clean (Jan. 25), Iron & Wine’s first album in three years and his major label debut. “Glad Man Singing,” the first of the batch, found Beam projecting his vocals and emitting a James Taylor vibe. Bongos and electric guitar fleshed things out for a sound that was about as big as Iron & Wine has ever sounded.

“Half Moon,” meanwhile, was a spare acoustic song with lovely Yo La Tengo-esque “doo wop” backing vocals, the female half of which were provided by fellow Sub Pop folkie alum Rosie Thomas. Harkening back to Iron & Wine’s early material, the song would’ve fit in nicely on 2004’s Our Endless Numbered Days.

“Summer in Savannah” and “Biting Your Tail” proved to be the highlights of the new batch, the former featuring trumpet and sax from members of opening band Nomo and evoking Calexico at its most epic, the latter packed with chest-rattling bass, synths, and anthemic lyrics that will be hung from dorm walls throughout 2011. “May your words be well worth stealing,” Beam sang in one of many quotable lines.

Throughout, Beam was gamely and wisecracking on the stage, clearly in good humor and in the mood to share it. “You’ll live in my beard?” he answered an outspoken fan at another point during the evening. “Now that’s just wrong. I’ll have to kick out some of those Smurfs I have in there.” Charmed as hell, the audience laughed giddily and Beam took it all in stride, egging them on and mock-yelling back at any shouted requests and inappropriate chatter.

And just as the night featured brand new tunes, Beam chose to presentcatalog cuts in brand new arrangements, aided by a six-pieceband. “Pagan Angel and a Borrowed Car” was carried by a steady guitarchug augmented by feedback; a slow, ominous version of “The Sea and theRhythm” fell somewhere between Tom Waits’ junkyard leer and AtlasSound’s ghostly electronics; “Love and Some Verses” was reborn with aSouthern rock boogie, Beam leading the track with a Gibson SG as anorgan tried to keep up.

Earlier in the evening, Beam presented a handful of songs all alone onstage that leaned on his whispery vocals and a fingerpicked acoustic guitar, kicking off with a gorgeous a cappella version of “Flightless Bird, American Mouth,” from 2007’s Shepherd’s Dog.

And while the crowd had its rowdy moments, the silence was quite impressive through this song and the other solo selections. “That’s a song I wrote about vampires,” Beam joked, making reference to the track’s inclusion on the Twilight soundtrack. “Very inspiring, the evil undead.”

Setlist:
Flightless Bird, American Mouth
Upward Over the Mountain
Naked As We Came
Evening on the Ground (Lilith’s Song)
The Trapeze Swinger
Woman King
Glad Man Singing
Love and Some Verses
The Sea and the Rhythm
Pagan Angel and a Borrowed Car
Morning
Biting Your Tail
Carousel
Innocent Bones
Summer in Savannah
My Lady’s House
Half Moon
Wolves (Song of the Shepherd’s Dog)
House by the Sea

Austin Ray
Tags: Iron & Wine, We Were There