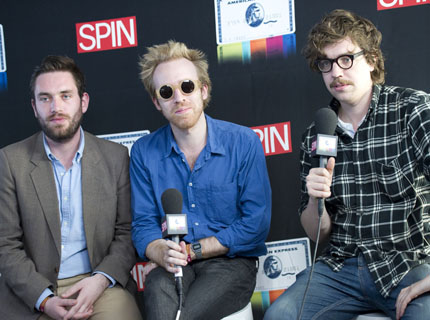 During the recent Voodoo Music Experience in New Orleans, artists stopped by the American Express® ZYNC ZONE, to chat with SPIN about their 2010 festival experiences and much more, among them London’s Hot Chip — watch our video interview, plus performance footage below!

The group has been heavy on the festival circuit this year, making about “30-35″ appearances at various musical gatherings, according to guitarist Al Doyle.

“We realized quickly it’s important to give your audience some consistency,” Doyle said.”Our shows, we’ve got it down now and it’d be weird to break it up.We’ll give people a solid ninety minutes.”

Even with all touring the band has still found a few stray minutes to get going on a new record. “There are rumors we’re starting to work on a new record and those are true, but only in the sense that we’re constantly making music in our downtime,” Doyle said.”Which we don’t have a lot of.”

See all of our exclusive interview with Hot Chip below, and click here to check out more interviews from the American Express® ZYNC ZONE!Scalable, non-watermarked