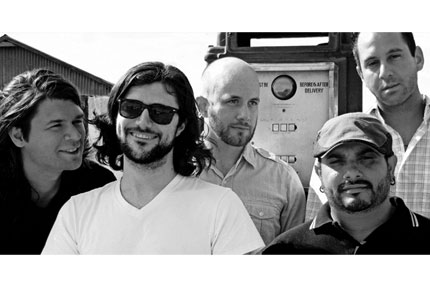 Long Island rockers Taking Back Sunday are currently finishing up their first album with their classic lineup in seven years, but frontman Adam Lazzara has already posted a new track, titled “Best Places to Be a Mom,” online. Hear it below.

“Best Places,” a raging three-minute anthem, was the first track written by the newly reunited lineup, which welcomes estranged guitarist John Nolan and bassist Shaun Cooper back to the fold. Lazzara recently told SPIN.com that the band had such good chemistry in the studio, they cut “Best Places” in twenty minutes.

“We had quite a bit to drink, so we went to see if we could play the old songs, which just went terribly,” Lazzara said. “So instead we tried a new song [the band had been exchanging ideas via email] and this was the first song we played all the way through – normally, our stuff just doesn’t come together that quickly.”

As for the song’s title, Lazzara says not to read too deeply into the meaning. “I was checking my email one day and ‘Best Places to Be a Mom’ rolled across the news ticker. I thought it was funny and in context it is, to me at least.”

Check out SPIN.com’s complete preview of the band’s forthcoming record, due out early next year, here.