Plus: West gives an update on his album collabo with Jay-Z. 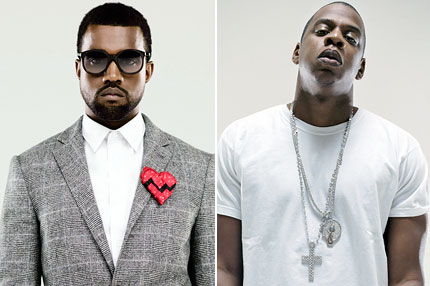 With four weeks left to go until he releases My Beautiful Dark Twisted Fantasy on November 22, Kanye West is keeping his promise to release new music each week for his GOOD Friday series. The rapper’s latest track to hit the web is his collaboration with Jay-Z titled “The Joy,” which also features cameos from Charlie Wilson, Kid Cudi, Pete Rock and a sample of Curtis Mayfield’s “The Makings of You.” Get it for free here (you’ll need to enter your email address).

Unlike epic songs like “Runaway,” “The Joy” is a minimal hip-hop jam powered by nothing more than a skeletal boom-bap, breezy guitar riffs and other light atmospherics. Still, West delivers some hilarious quotables: “This beat deserves Hennessy, a bad bitch and a bag of weed, the holy trinity,” he raps.

With Fantasy in the can, West has been working on a new album with Jay-Z. As SPIN previously reported, West and Jay-Z were originally going to release tracks recorded together as an EP, but with West planning to put some of those cuts on Fantasy, he and Jay are teaming up again to record fresh tracks for an album titled Watch the Throne.

On his Twitter late last week, West posted an update about the duo’s progress. “I can never get use to this!!!!” he wrote. “This shit we doing is so modern, so hood, so club, so hip-hop…all of the above!”