The longtime pals team up for anthemic new track "I Need a Doctor." 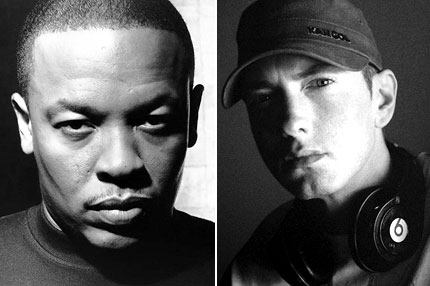 As Dr. Dre gears up to release his long-awaited Detox early next year, new music is hitting the web left and right. The latest? Dre collaborating with one-time protégé Eminem on a soaring anthem “I Need a Doctor.” Check it out here.

Produced by Alex Da Kid, “I Need a Doctor” mostly features Eminem delivering surprisingly grateful lyrics about getting rescued from oblivion by a mentor ? and returning the favor ? before Dre pops in to deliver song’s final verse. (It’s not clear if this track is slated to appear on Detox.)

As SPIN previously reported, Dre has suggested that once Detox gets released, it could be his last album. “I don’t ever see myself retiring totally from music, because I have a genuine love and passion for it,” he said. “But as far as me going into the mic booth, that shit is over. I’m always going to talent scout and try to find new artists to work with. But, yeah, that’s it. I don’t see myself doing it the way I’m doing it now.” Guess that means we’ll never hear that concept album about the solar system.