The Austin, TX, art-rock band unveil the first track off their February album. 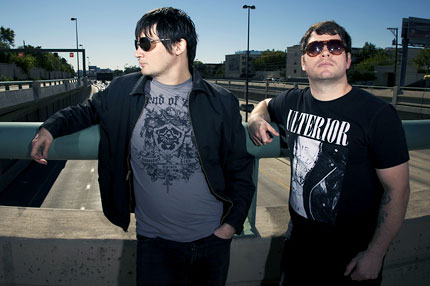 Austin, TX, art rock vets …And You Will Know Us by the Trail of Dead will release their seventh studio album, Tao of the Dead, on February 8 via their own Richter Scale Records. SPIN.com scored the first single from the LP, “Summer of All Dead Souls.” Listen below.

LISTEN: …And You Will Know Us by the Trail of Dead, “Summer Of All Dead Souls”

Trail of Dead stripped down to a four-piece and recorded the album this past summer at El Paso, TX’s Sonic Ranch with Chris “Frenchie” Smith (behind their 1998 debut) and Chris Coady (Beach House, Yeah Yeah Yeahs). The LP is split into two parts, Part I and II, each recorded in a different tuning (Part I is in D, while II is in F). Part I is divided into 11 tracks or chapters, which play together play one long song, while Part II is an epic, 16-minute-long track with six movements, that’s produced by Coady. This format is an homage to frontman Conrad Keely’s childhood influences.

“It’s the way I listened to albums when I was a kid, seeing as some of my favorite records were Pink Floyd’s Dark Side of the Moon, Yes’ Relayer and Close to the Edge, and Rush’s Hemispheres,” the 38-year-old rocker says. “I always liked listening to records that were just a continuous piece, like an orchestra or a symphony.”

The band recorded the LP in 10 days, a record for Trail of Dead. “We wanted to record it fast — really fast,” says Keely. “Many of our records have been painful to make and I didn’t want that experience again. I wanted to have fun. That approach made the whole record sound more spontaneous, fresh, and quick to deliver. There’s no waiting around — [the sound] is immediate.”

He’s right. Unlike the melodically meandering, slow building tracks the band has become known for, “Summer of All Dead Souls” gets straight to the point with rolling drums, a driving bass lick, and big electric guitar that shifts from hard staccato strums to riffs with an outer-space effect. Its lyrics are about the global economic situation and “the haves and the have-nots,” says Keely. “[It’s] inspired by a documentary I saw about China, or, as they’re calling it these days, Chimerica. It illustrated the ongoing struggle between the third world and the first world.”

Keely’s other personal favorites from the album include “The Spiral Jetty,” a minute-and-a-half-long basher “inspired by a piece of environmental art in the Great Salt Lake,” he says. “Someone in the ’70s built this spiral of stones that goes out into a lake and took a photograph — it’s a fairly iconic picture. The theme of the song is the idea of humans feeling the need to leave monuments and their mark on the land.”

Another, “Radio Free Cosplay,” is about the state of rock music. “In the song I’m observing how rock music these days seems to be about role playing,” says Keely. “It’s all image-oriented. There are a lot of videos trying to sell the idea of this musician that’s dressed up to look like the stereotypical rock star. It overrides the quality of the music. The music doesn’t matter as much as the look.”

The album’s title, however, is inspired by something thousands of years old: Tao Te Ching, a classic Chinese philosophy book penned in the 6th century BC. “It was just happenstance, actually,” says Keely, stating that the lyrics for Part II are drawn from the book. “We were working on lyrics in the studio and usually studios have a stack of poetry books to inspire people. For some reason, this studio didn’t have any, but they did have a copy of the Tao Te Ching!”

Keely, an avid artists whose detailed pen drawings appear on the album’s covers, says the Tao of the Dead’s CD booklet will features the first 16 panels of his upcoming graphic novel. “It will hopefully be out shortly after the album. Some of it ties into the record. It’s a science fiction story that’s set in a steampunk milieu, aesthetically, and involves flying ships. It’s an introduction to the world that I’ve been working on since I was a kid. I’ve been developing a novel around it, too, but that is going to take years of development.”

…And You Will Know Us by the Trail of Dead will hit the road behind their new album in March 2011.

William Goodman
Tags: ceremony, Songs, …And You Will Know Us By The Trail of Dead