Download the first song from Make Out, a fun-as-hell new project from Jesper Mortensen. 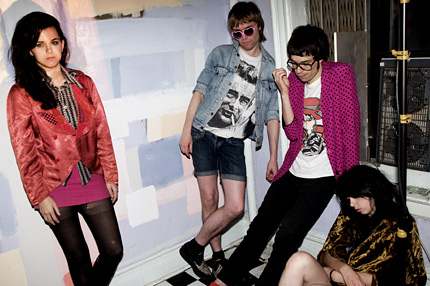 As half of Danish dance duo Junior Senior, Jesper Mortensen crafted one of the most unabashedly fun hit singles of the past decade — 2003’s “Move Your Feet,” and its amazing, Atari-esque video, featuring a mischievous squirrel. Now, with Junior Senior having disbanded in 2008, Mortensen is back with a new, glammy rock project called Make Out. Download their debut single, “I Don’t Want Anybody That Wants Me,” below!

On the song, Mortensen, who now lives in New York City, and his band mix Sunset Strip rock’n’roll with 1970s Bowery punk, an era to which snarling lead singer Leah Hennessey has a direct line: She’s the stepdaughter of New York Dolls frontman David Johansen.

Hennessey met Mortensen and bassist Anders Christiansen at a dance competition called Soul Clap. “I was a finalist but I lost to a good-natured middle-aged man with smooth moves, and the Danes talked to me afterwards and told me I should have won,” she tells SPIN. Through friends, they then recruited drummer Olivia Alminiana.

Mortensen was seeking a much simpler sound with this new project, but still wanted it to deliver “instant excitement.” “I want to make people go, ‘Are they retarded or mad genius?'” he says. “[It’s] music you shouldn’t listen to a million times to get.”

As for the band name, Hennessey explains: “Making out is one of the last sublime things left in a totally ugly world.”