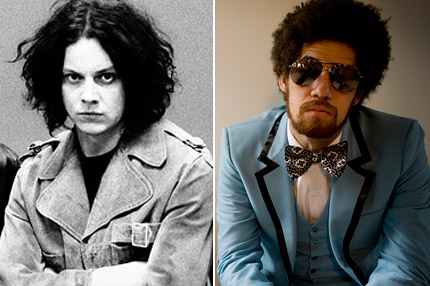 While releasing successful albums over the past five years with Gnarls Barkley and Broken Bells, and producing records with bands like the Black Keys, Beck, and Sparklehorse, Brian “Danger Mouse” Burton has been meticulously working on a secret project called Rome — and it features Jack White and Norah Jones.

Danger Mouse revealed the news in an interview with The Guardian, saying he’d been working on Rome with film composer Daniele Luppi since the two bonded over a love of Italian soundtracks of the 1960s. For the project, they recruited some of the best musicians who performed on the scores of spaghetti westerns and other Italian cinema, and enlisted White and Jones for vocals.

“I played some of the music for Jack White when I was on tour shortly after doing the first session, just to show him what I was doing, because at the time everyone thought I was just a hip-hop guy, or whatever,” Danger Mouse said. “He liked it, but at the time I wasn’t even thinking of using him — you know, it’s Jack White. But in the end, I thought, he’s really into it — why not?”

According to Danger Mouse, he and Luppi had White sing in different voices, and ended up using them both in harmony on the album. “It doesn’t always sound like him,” the producer said. “Sometimes you’re like, is that Jack or not?” Jones, meanwhile, plays the female counterpart to White’s male lead.

Recorded at the Forum, a Roman studio/converted church used by Italian film great Ennio Morricone and others, the project was conceived over three trips to Italy — and was entirely self-funded. “I couldn’t ask a label for money for something when I didn’t know what it was going to be,” explained Danger Mouse. “It could have just been a hole that money disappeared into.”

No release date has been announced for the project.